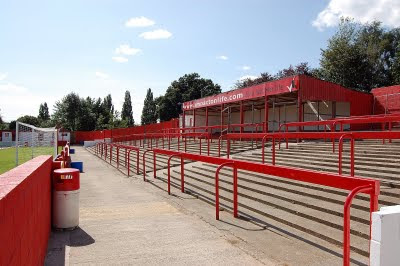 "Hello, would you like to purchase a golden-garden ticket"? They don’t do golden-goal at Alfreton Town. Its much more fun to pick the number of the first winning house with the lucky garden the match ball ends up in. Replacement glass for greenhouses must be a boom market in this part of the world. The estate behind the club shop end of the Impact Arena (very apt name) suffered a Gaza Strip bombardment throughout most of the Southport match. The Nicky Laws (Alfreton manager) strategy of football is not pretty but probably effective. To say Alfreton were direct is an understatement, it was biff-bash-bosh in overdrive. Southport struggled to cope with it, I suppose they tried to counter it by adopting 3 strikers but the forwards never had the service. Midfield craft and culture had a day off. Two of the more respected sides in the division certainly had a good go at winning this match but both failed to complete their fundamental game plans, what resulted was fast and furious football but ultimately very scrappy entertainment. Chances came and went and it took a very late Southport equaliser to seal the draw in injury time. Personally I reckoned this was slightly unfair as Alfretons share of the chances had greatly outweighed Southports despite the manner that they arrived in. As for my opinions of the ground, I thought it was excellent. Ok, the seating doesn't offer the clearest of views but the charisma and friendliness of the place is first class. There is something about the uniformity of the low level 'red' outlook that provides a great feeling of 'real-stadium' presence. Very good programme as well. I also enjoyed my Pukka-steak-pie. Shame I had a stinker of a summer-cold, at least my relentlessly running nose (of Niagara proportions) provided me with plenty of room in the stand. 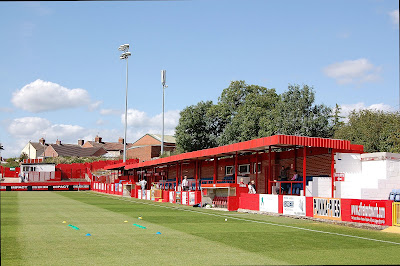 I went for the first time the other day, have to say I was very impressed with it. Nice tidy ground - shame we got beat mind :(