Here is another instalment of some of the other games I went to pre-season: 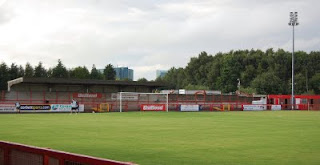 A very keen Witton side hustled and bustled Fleetwood from the start and it was a frenetic match throughout. Despite going behind to a bit of a freak opening goal Fleetwood always had the ability to create that extra bit of space and produce the better football. I'm not going to write 10 chapters on 90 minutes play but suffice to say Fleetwood ended up 3-1 winners with an excellent well taken Chris Williams goal wrapping up the proceedings in the last few minutes. I know the obvious rule that friendlies mean little in assessing long-term capabilities, but all the same, Fleetwood do have some very good players and they did put together a number of quality moves that verify a certain degree of class and intent. I would agree with others (Conference North bods) that Fleetwood will certainly be one of the danger sides this coming season. They already look strong in most positions. A shame that Witton scrimped on the electricity bill. They didn't put the floodlights on until 9.20pm, by then it was almost the dark of night and we were into the last 10 minutes of the match. Had a nice cup of tea from the tea-hut but due to scoffing a number of sausage sandwiches before I set off I wasn't in the mood for any more grub. However, it did look pretty good stuff and an awful lot of the small crowd had their heads stuck in food trays. Nice to see a few Fleetwood fans as well. Match Rating 5/10
Saturday 25th July 2009 Match 5
North Ferriby United 0 Harrogate Town 1 (F) 3pm
Admission: £4
Attendance: Approximately 88
Programme: None available
Weather: Warm with sunny spells
Parking: Roadside, 300 yards from the ground, no problems, easy exit
Tea hut purchase(s): Tea 80p, Crisps 50p 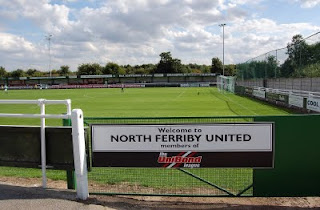 Humber Bridge territory. Around 20 to 30 Harrogate Town fans had made the trip to the Unibond Premier League ground of North Ferriby United but there was not a lot of new season promise for their efforts. Harrogate struggled to put meaningful moves together and the accuracy of the final ball often proved a problem. North Ferriby United had the better of the game and certainly had enough worthwhile chances to comfortably win (what was) a competitive friendly. I can see the Harrogate defence having a tough time at some Conference North games this season. 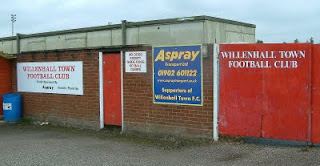 Rain. Grey clouds. An industrial estate between Wolverhampton and Walsall. £3 quid and you're in. You cannot miss the padlocked lavatory block next to the turnstile. Many are hungry and in need of a warm drink. A big delicious Pukka Pie board is placed beside the tea hut but they don’t do pies. Its 50p for chemical tea.What a big, big pitch, it looks untouched from the games of last season. The main stand gives shelter but the seats are full of grime, I wait until the rain stops. Traversing behind the far goals is like a Bear Grylls out-take.Kick off brings the full realisation that the ball is going to reach the untold heights of 'bobble-factor 10', this is to such a degree that the match is definitely going to be 'unbalanced'. Paul Robinson would have a great time here For all these 'issues' one cannot help liking the basic but encouraging attitude of (Unibond Division 1 South) Willenhall Town FC, it is obvious that the supporters like the club and they are genuinely keen to get behind the team. They probably have little cash to spare and what they do have they use carefully. They played the better football tonight in very difficult conditions (probably it comes natural to them).And yes the rumours are true; they beat Stafford Rangers 3-0. Match Rating 4/10 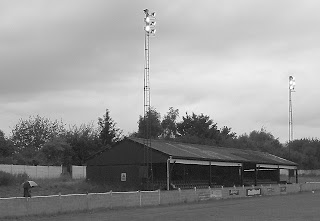