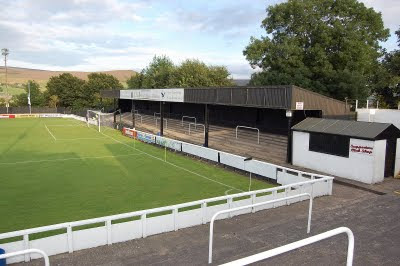 A few miles along the road from the tourist trap of Uppermill rests the scenic setting of Mossley football clubs Seel Park. The sloping pitch seems to drop off the side of a mountain beyond the far touchline. This dramatic feature leaves one of the best backdrops to a ground I have seen in quite some time, the sweeping glory of the sun kissed pennine moors beckons you to get your rucksack and muddy boots out (but not tonight). Mossley have that very nice cultural feel of a decent little non-league club. Keen local supporters and smartly dressed officials in blazers and ties, (one was selling the programmes from a little table just inside the turnstiles), all eager to see the match in such magnificent settings. How nice to see around 20 or 30 Colwyn Bay fans as well, its not an easy trip up to Manchester-way from the North Wales coast at any time, especially not for a midweek game. These same supporters soon had recompense for the mileage. Mossley got the lead from a defensive mix up but the visitors soon levelled and gradually started to run the proceedings with a fine all round performance which glistened with polish, pace and accuracy. Two more goals for the visitors early in the second half put paid to the hopes of the Mossley faithful but the local team still battled hard and never threw in the towel. I enjoyed a nice steak and kidney pie from the tea hut which was probably courtesy of 'Blainey Bakers' who had a smart little advert in the match programme. Another jolly good touch for the £7 admission was the hell-for-leather whirling hand-bag dance put on by the mixed contributions of both sides late in the game. Everybody got involved and it did look like there could be some pretty decent line dancers who could possibly be missing their true vocation (excellent stuff and nobody got hurt). To call it a fist-fight would be silly. 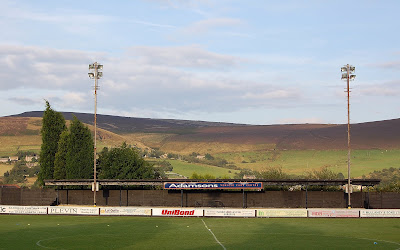 Thanks for this post. On your recommendation I visited Mossley last Sat. Very scenic ground, I agree. Pics and report on my blog (thanks for the link, by the way).

I'm thinking of visiting Ramsbottom or Rossendale in future rounds. Which is the better spectacting experience, do you think?

Both Rammy and Rossendale are great places to watch football. Rossendale have a fantastic traditional Main Stand which offers great views of the surrounding hilltops sweeping up from the valley. If I had to choose I'd have to pick Ramsbottom as the primary option, a hidden gem beside the cricket ground and the East Lancashire Railway. Good tea hut too.