These are the final 2 pre season friendlies I attended out of a total of 8 (see Pre Season Games Parts 1 & 2 for the others).

I suppose it isn't the seaside anymore. The tide is so far away at Southport these days it’s not even on the horizon.
Greasy fish and chips, luvly Liverpool day-trippers and overflowing rubbish bins. Despite the tack it is still a nice town and all the better for a sunny afternoon. The Southport ground at famous Haig Avenue is one of the better ones in the Conference North division but why is everything 25% more expensive? Probably a lot of the dosh goes towards paying off the legion of stewards; I've never seen so many orange jackets and FBI identification badges. Some of them are so negative and indulgently 'up themselves' it’s unbelievable. For goodness sake it was a friendly against Rochdale. The match was pretty even for the first quarter, Southport even took the lead. After that it was one of the most one sided games I had seen in many a season. A very good Rochdale side tried out various tactics, all with success. They completely overwhelmed Southport to finish 4-1 victors. It could have been a more emphatic rout but the home side did well to stick at it and they never gave up. A decent trip and good weather. It would be wrong to judge Southport on this game, they could still turn out to be a force next season, players are still getting tuned-in. They also had the misfortune to come up against a quality side like Rochdale AFC who did look very impressive on the day.
Match rating 6/10 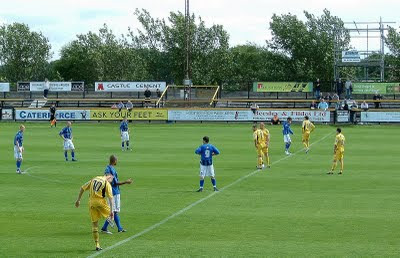 Programme: £1 for a folded piece of A4 paper (ridiculous).

Tea hut purchase: Not open until just before the game.

They walked up the hill together. Bower Fold hidden in the distance. A mix of ever-eager-early season hopefuls. Conference North die hards with winter-worn blue and white scarves and the newly born glory hunters already in their City nylon. A decent crowd to see the revamped Stalybridge Celtic take on the Manchester City select from Eastlands changing room 'D'. After the nasty greeting of a club charging a full quid for 1 folded piece of A4 paper masquerading as a programme it was nice to see the tree lined glory of the scenic little ground again. *(I realise that I wasn't forced to buy this so-called programme and every club needs to make revenue but bluffing punters in such a shameless style is really out of order, even the printed numbers for the City squad didn't remotely match the reality of who was on the pitch). Celtic started like a train on fire but it didn't take long for the derailment. The youth and pace of the City side cut them apart (relentlessly). No first teamers or overpaid Jessies on show, just a very good standard of reserve and youth squad players. Apart from a middle of the game 'lull' to allow the local reporters to recharge their laptops, the young City players gave out a major lesson in football. The game ended 7-0 to City but they could easily have had 10 or 12, Stalybridge did create a few half chances and did produce some midfield flow but their defence was continually exploited on positional awareness and they only had the woodwork and the goalkeeper to thank for keeping the score down to just the seven. No wonder the keeper Paul Phillips got a good reception when he came off near the end; he was probably man of the match! I'm afraid a lot of the newly built Bridge got burned last night, whether they can put this game into context and recover some poise for the league opener against Redditch is open to speculation. It will certainly have made the management of the club reflect on this choice of opposition just a few days before the new campaign? 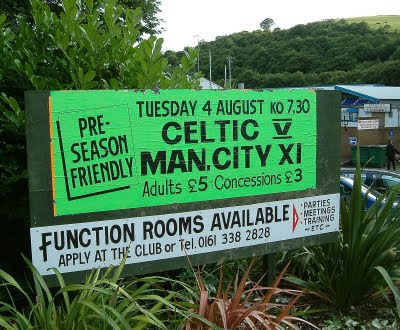