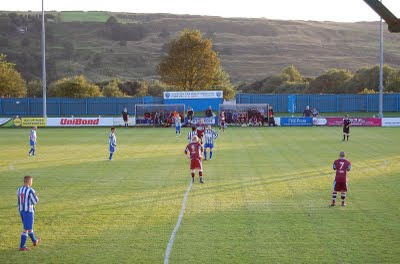 On a hillside above the village of Waterfoot nestling amidst the Rossendale Valley lies Dark Lane, home of The Stags (no not Mansfield Town, this is another lot). This fixture brought along Radcliffe Borough from the other side of Bury, I suppose you could call it a Black Pudding derby, this part of Lancashire is renowned for the delicacy. Hmm, the thought of food got me peckish. I checked out the tea hut which was inside a portakabin and I immediately invested in a nice meat and potato pie. I was informed it was a Billingtons pie which I took to be a local bakery. As with a lot of tea huts these days the place was doing a steady trade in frying up (what appeared to be) frozen chips, fine if you're mega hungry but they're never as good as proper chippy-chips, I decided not to eat-in at the politely placed tables and went back out into the sunshine. Whilst stuffing down my pie I realised a strange feature with the pitch markings, they were all significantly 'wonky', not just a bit wonky but really wonky. Images of Owd Ned the drunken groundsman staggering behind the line-gear with a bottle of Pursers Rum came to mind although there is probably a more reasonable justification for the strangely odd 'wandering' lines. Check em out if you ever do a visit. It was now time for the big match, Radcliffe quickly stamped their intentions to dominate the proceedings and the building pressure ended up with an early lead from a resultant penalty kick. Soon afterwards it was 2-0 to the visitors, this one came from one of the daftest own goals you could ever hope to see. A chip past the keeper from a Radcliffe forward saw the ball slowly bobbling towards the empty net, a Rossendale defender then arrived to save the day but instead of clearing the ball for a corner or even simply stopping it, he just blasted it straight into the nets! Rossendale were always going to struggle after that but they did produce a mini-fight back to make it 1-2 but more late pressure from Radcliffe saw 'Borough' ease home for some more points in what is turning out to be an impressive start to the season for them. The gathering swarm of midgies made the second half a bit of a pain but the visit was worth the effort. This hidden ground certainly looked fine in the August summer evening and there was always something going on to keep one occupied. 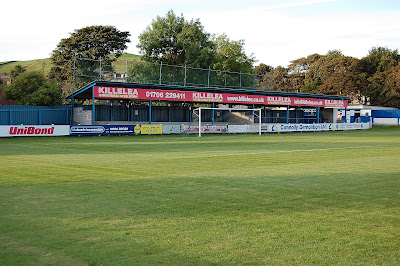