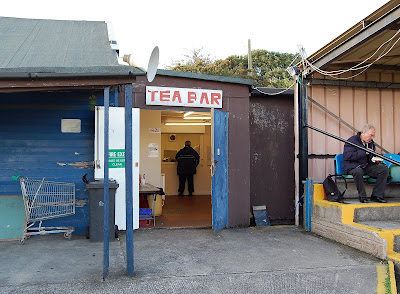 As the subtle fumes of stagnant chemicals gently wafted upwards and outwards from the Manchester Ship Canal, it gave a unique extra element to this local derby FA Cup dog-fight at Warrington Towns Cantilever Park. The showers had stopped leaving a zippy wet surface to glisten in the late evening sunshine. I swear I could smell chinese curry as I sat 'peckishly' in the small main stand? Apparently it was some type of tank cleansing agent sloshing around in the canal just a few feet behind me. I'd already clocked the tea bar on my way in and I planned to do a pre half time raid before the locals got their orders in. Unfortunately the match didn't live up to the hype of a cup tie classic but it was very competitive stuff throughout the full 90 minutes. Leigh Genesis (missing Peter Gabriel and Phil Collins, apparently both cup-tied, sorry) played the more refined football, possibly a trait handed down by their manager, ex premier league star Gary Flitcroft (did you know his brother Dave is assistant manager at Rochdale). Anyway, it was against the run of play when Warrington scored from a long ball down the flank and boy did the home side set out to defend the lead. Leigh threw a lot at them in the second half but Town stood firm to earn a home tie in the next round against European playboys Nantwich Town. One utter tragedy from the nights proceedings was my absolute horror of finding out that the greedy locals had scoffed all the pies even before half time. I was actually in the queue when the bloke behind the counter announced the disaster, it took me a good 20 minutes to calm down, if I had been 2 minutes earlier or 2 places nearer the front I would have secured the last pie. 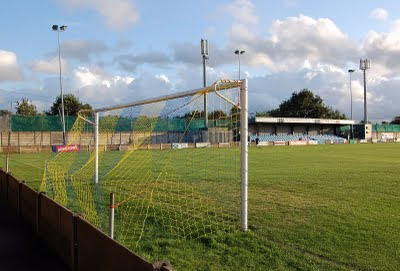