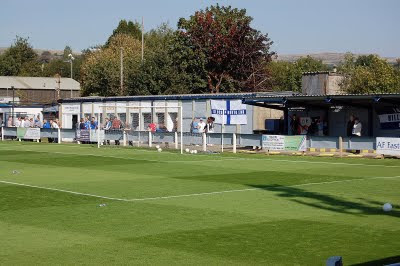 I'd seen the pies as I entered the ground. The tea hut was conveniently positioned next to the turnstiles. There they lay, carefully packed into the glass fronted warming cabinet, all in order with each shelf clearly identified for accurate order-picking. Even though it was only 2.15 there was already a bit of a rush on, a tell tale sign that the grub must be good. I got to the front and was spoiled for choice, they all looked good pies and there was plenty to choose from. I opted for a steak one and politely asked the ladies about its origins. They didn't seem to know the name of any bakery only that these Glossop pies were award winning delicacies and they had been carefully baked close to the ground. I handed over my cash (£1.40 for the pie and 60p for a large cup of tea) and hurried away to a secret corner to scoff my pie in private. I'm telling you, this was the best pie I had devoured all season, it was wonderful. Light golden pastry, not over flooding with gravy and absolutely packed with proper steak, it was fantastic. I could have got back in the car there and then and gone home a happy man. This FA Cup clash was off to a good start and I settled down to enjoy the charismatic surroundings of Glossop North Ends Surrey Street stadium. 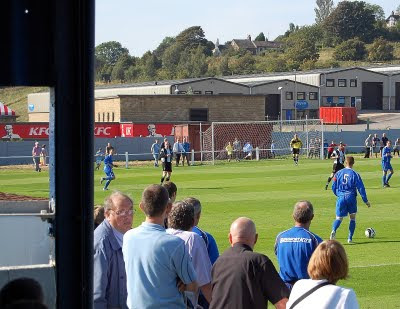 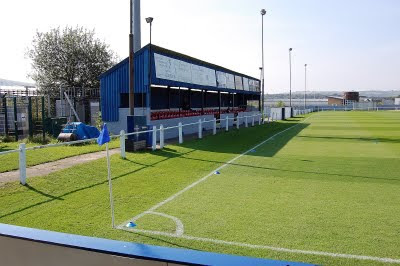 The clubhouse bar had been doing a roaring trade and it was a noisy start to the match proceedings. The Chorley contingent were soon singing their delights at a quick lead and the away side soon established a comfortable early dominance. We were well into the half when Glossop had their first serious attack and to most peoples surprise they promptly banged in the equaliser. Chorley lost the plot a bit after that and the home side started to take command only for Chorley to get an undeserved second goal. The second half was a stop-start scrappy affair and Glossop struggled to put anything cohesive together, Chorley had the bulk of possession with the tall Chris Amadi proving to be a real handful down the left flank. When Chorley got the third goal the tie was nearly done and dusted. Despite a Glossop goal right at the end and a scrambled Chorley clearance just before the final whistle the tie finished 2-3 to the Unibond First Division side. It had been a gloriously sunny September afternoon and the perfect location for an early round of the FA Cup but the real star of the show wasn't the weather, it wasn't even the skilful Chris Amadi...... it was that wonderful steak pie from the tea hut!

Enjoying your blog [having spotted it on the Kempster message board]. You've been to many of the same grounds as me - eg Glossop, Ossett Town, Droylesden, etc.

Take a look at my blog.

Thanks Paul, had a look at your cup blog and really liked the Bridlington stuff, some great pictures as well. Maybe I might bump into you somewhere, look out for a nutter in a bobble hat.