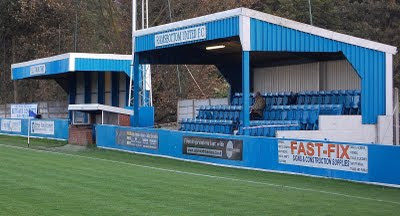 Halfway between Bury and Rawtenstall, beside the River Irwell and the East Lancashire Railway rests the Riverside Ground at Acre Bottom, Ramsbottom, the excellent little home of Ramsbottom United FC. I've previously passed this scenic ground on the train and had always wanted to pay it a visit. Tonight, hopes were high amongst the locals as United had already climbed to a nose bleeding sixth in the table whilst the visitors from Merseyside, Formby, had somewhat struggled to gain early season momentum. I arrived early and picked up a programme, a very good read as well, then it was 'tea hut time'. The bright little hut was very well kept and offered a small seating area with club photographs on the wall. Just as I got to the counter with my pie money burning my hands a hungry looking family group entered from the side door and out manoeuvred me, I shouldn't have lost concentration, now I was forced to take a back seat while the group leader ordered half the hut, blast! They took the steak pie stock in one go! Eventually I got a chance myself, how nice to get a good cup of tea in a proper mug and only 60p. Have to say my meat and potato pie was a bit dry but at £1.20 it certainly wasn't a rip-off. 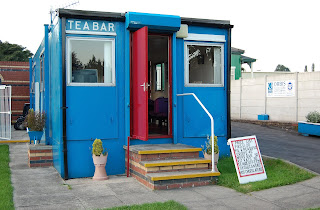 By 7.40pm we were almost in darkness and I almost thought one of the heritage trains was about to pass by on the adjacent railway line, not to be, the noise was the trusty generator and on came the floodlights, match time! I took up a great seat in the small main stand, with plenty of space between the rows and comfortable arm rests as well, this was North West Counties League luxury at its finest. 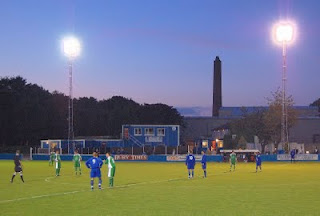 Ramsbottom looked like a side that wanted to play passing football and get the ball wide, this was unfortunately hampered by bobble-factor 10 on the bumpy surface, when added to a shock Formby strike in the 9th minute, which was doubled after half an hour and then to top it off 3 first half injuries, well, the home teams original game plan looked a lost cause. Matt Edgington played well before going off injured and joint player manager Bernard Morley remained a threat throughout the game but Formby did a job on Ramsbottom by keeping it tight and hitting them hard on the break, this was a valuable and well earned away win and all credit to the Formby keeper for some great saves on the night. I considered it a competitive decent game of football and well worth the admission fee.