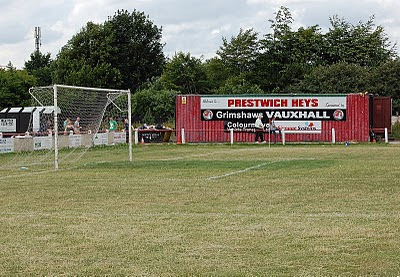 What better way to start the new season, a fine and dry trip to the respected home of Manchester FL Premier League playboys Prestwich Heys. Tucked away behind some trees just off the busy M60/M62, the location hosted those esteemed visitors from the North West Counties League, Padiham.
Frugal Glenn who'd decided to make the trip alongside me was mighty pleased to find free admission at the solitary turnstile, a bonus for his early season budget "big-time" as he subtly put it. The fact he spent the next 15 minutes nervously 'on-the-move' was slightly negative behaviour but he didnt want to bump into any kind of official going around with a hat (which didn't materialise). Glenn was also sporting a rare 'brand-new' t-shirt for todays game which even had a football theme, he'd bought an Italian world cup number in a fire sale at Asda's the day after they'd been dumped out of the competition, it cost him (as he put it) " a very fair 2 quid"?

There is not much in the way of stands and terracing at Prestwich just a small building housing a cosy looking bar and an ex-container style changing rooms section. The pitch is nicely railed off with accompanying hard standing which in turn is spaciously sectioned off by a concrete perimeter fence. A tidy little set up for their league standing and it looked mighty fine in the warm July weather. I didnt expect a fancy tea hut for a friendly and I am not sure what would possibly be on offer for an official league game, however, the bar was open and a few people had cool pints of ale to withstand the sultry heat. 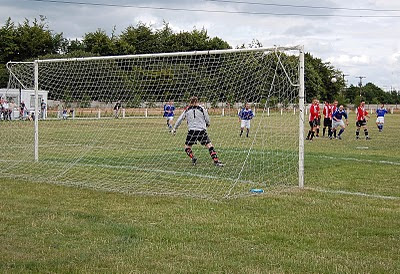 The hyped up North West drought had made an effect on the pitch which looked hard and dry (understandably) but it does look a good flat surface at Prestwich.
The game itself was a hard fought encounter with some very blunt challenges, none of that World Cup diving and screaming here, even early doors both sides were ploughing in extremely hard, it appeared the game might have boiled over but it gradually simmered down and for most of the first half a kind of ping-pong, back and forward, kick and rush collage of football cuttings put itself together.
I got my water out of the car at half time which gave me the weird sensation of drinking a hot water bottle like you put in the bed on a cold winters night.

During the second half both sides put some nice passing movements together and some good chances appeared at both ends. Prestwich looked quality in midfield and Padiham have a real cut and thrust attitude up front, it was entertaining stuff after that dour first period. I know these games are just about fitness really but it was good to get back on the groundhopping merry-go-round and both me and Frugal Glenn enjoyed the afternoon, shame it ended 0-0, I went all last season without a goalless draw and now I've chalked one up in the very first game! 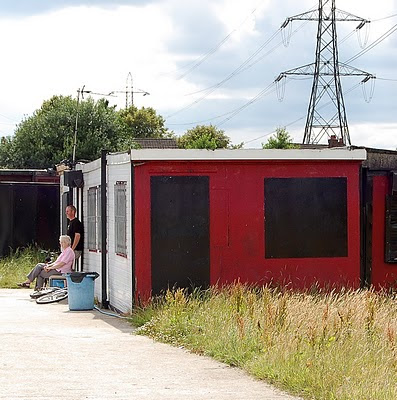