I made the decision to get to Dronfield, home town/village of Sheffield FC, via a scenic journey through the Peak District. Bit of a mistake really. It took me nearly 3 hours to do the 50 odd mile trip and the last 15 of these witnessed emergency rally driving manoeuvres just to make kick off. The big problem was the exceptionally long tail back crawling through the terrible bottle neck of Glossop, take it from me, it is not recommended, I'd advise anyone to avoid the place at all costs, come home time I took the M1 & M62 motorways even if it did put an extra 20 miles on the clock. To exacerbate the situation once I found the ground there was nowhere to park. The surrounding roads and streets offer zero opportunities to dump your car, unless you want to half park the kerb on the busy A61, the match-cruiser has cost me enough hard cash in the last month without forking out for further repairs. My only option was to enter the already packed car park. I dont like places that allow block stacking and the doubling in of vehicles, it can take an eternity to get out again. I just managed to wedge the match-cruiser (or match-shed if you like) up against some cones next to the office, I was so far out in the only driving lane I would be sure of a sharp exit (excellent). 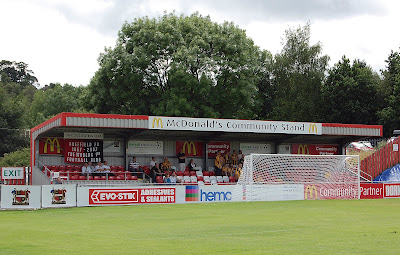 Upon entering the BT Local Business Stadium I immediately realised what a great little place it was for football. It had that charm and ambience associated with a quality non league football set up. Courteous friendly groundstaff, a nice chap doing 'alfresco' match announcements, kitchen staff doing heat-thermometer checks on the pasties and excellent little stands with seating behind the nets and terracing down the touchline, all superbly complimented by a lovely looking playing surface. I liked it! I had heard that not all sides of the ground were accessible? Maybe I was wrong, however, on my visit you could get to all four sides, the only restriction was that you couldn't stand on the steep sheeted bank down the far touchline and the dug outs were blocked off down that side meaning you had to double back rather than walk all the way around (not really a problem to me), I rated it a very good viewing experience.

I got a programme (with good reading) and tucked into my Pukka Pie as the teams came out. Todays opponents were the respected Boston United, a few punters dark horses for Blue Square North honours this season, newly promoted and looking resplendent in their sky blue away kit they certainly looked the business. The grapevine drums have been banging about the sharp skills and goal getting attributes of Bostons new forward Miles Hunter, having seen Miles play for his 60 minute spell today, it appears Boston have found a diamond! He's fast and clinical and difficult to mark, he looks like causing mayhem for a good many defences this season, he has some good solid support from the other Boston forwards as well. 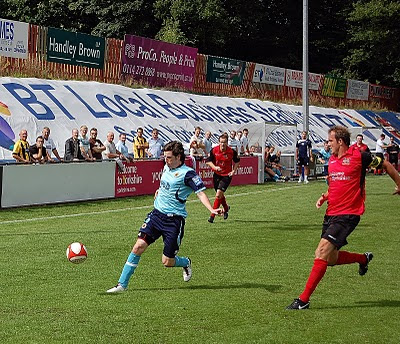 This was a top match for a friendly and both sides played some really good football, it was end to end entertainment for the most part. Sheffield themselves look to have signed a top quality player in the very nippy and proficient Ash Burbeary, signed from Gainsborough he looks the business and oozed quality when he was on the ball, also nice to see Curtis Woodhouse still doing an expert job in midfield.

There was plenty of action for the crowd to appreciate, something the travelling band of supporters from Boston would be glad of, especially as they snatched a late victory after being 2-1 down well into the second half. The Boston followers will surely see some top notch football this season and I would agree with those in the know, they will be in with a very good shout for a bit of success. 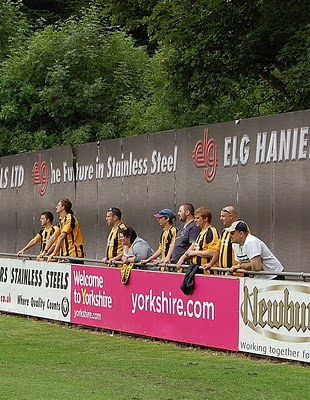 With the added bonus of the Coach and Horses pub right on the doorstep with its own half-time gate it truly is a wonderful set up at Sheffield (pity I was driving), many a football fan will be like a kid in a sweet shop at this place, a much enjoyed visit. At the final whistle I quickly dashed back to the match-cruiser and was relieved to find a clear path to the entrance, a number of later arriving cars appeared to have been left 'Starsky & Hutch' style purely at random, blocking even further cars in. I took the A61 towards Sheffield city and picked up signs for the M1, a good days football! 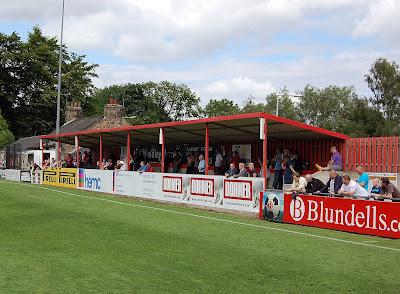 Thanks for the pictures and report. As being a boston fan and living in yorkshire i would have been at the game if it had not been for a stupid wedding. Great to see a good handful of pilgrims make the trip. An exciting season ahead i sense.
Sheffield fc look to have a great set up there, i'm sure they will also be pushing for promotion this season. Good luck to both teams.

great report as usual - it looks like another ground i will have to visit !!
i have new pics/reports on my blog

300 - heck I thought I was doing well closing in on 80.... just discovering the delights of northern non league - the chips are far better than they are in Kent and when added to mint sauce - well I'm a convert... enjoyed the site - cheers!

Quality writing Uwdi. Would put this ground in my top ten.

We must hook up some time. Trying to tick off a few in the North this season mate, so keep em peeled on my 'coming up' section.