The Bridgewater Office Supplies sponsored Manchester League offers fantastic value for money, its free to get in! I took up the option of a late visit over to Tyldesley to check out 5th placed Hindsford FC who were playing their last game of the season against top 3 opposition courtesy of the Stockport Georgians. I've heard good reports about the Manchester League and I was looking forward to seeing the Hindsford ground hidden away at the end of Squires Lane, a nice little area which isn't too far from the busy main road which runs through Tyldesley centre. The ground appears just as the lane ends at a footpath which in turn leads onto open meadows and trees, a rather nice setting really. The club car parks sit either side of a metal corrugated building housing a club house and changing rooms directly adjacent to the half way line. This is the only structure at the ground and there is a small roof attached to the front which provides a bit of shelter against the elements. 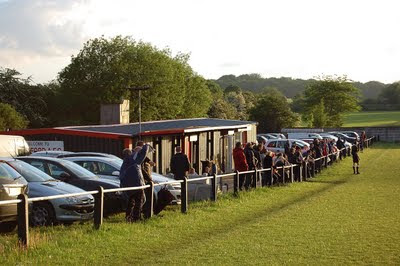 The rest of the ground is just a post and metal rail around the touchlines with a concrete perimeter fence set well back across the grass viewing areas. One of the ends is no access as the fence pushes in close to the pitch. I'd managed to get the Match Shed parked as close as possible to the car park exit gate but it wasn't long before I was block stacked in as the late comers hap-hazardly grid locked everybody, why dont people park down the street when a car park looks full? It causes chaos when someone wants (or has) to leave early (as happened once or twice tonight). I was lucky to find a way through not long after the final whistle. As regards the action on the pitch, this was a very hard fought energetic encounter with vociferous encouragment from the herds of coaches, assistants and other club members packing out the areas around the galvanised steel dug outs, they almost outnumbered the spectators who had gathered outside the club house. They all spoke the tongue of the sacred non-league football coach, if you've ever been within 20 yards of the dug outs you will doubtless know the phrases. It always appears to me that the players don't understand what they're going on about. I think the coaches enjoy it though. 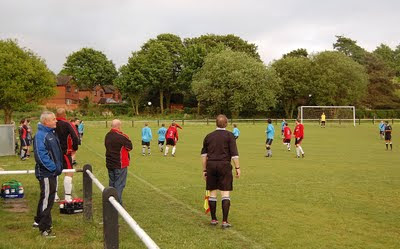 Some ferocious tackles were going in and a lot of appealing was taking place, credit to the players for taking it in their stride, none of that fancy pants diving and handbags you see from the likes of Arsenal and Co on the tv ...thats for sure. Fair do's to Abid Hussain who was having a fine match as Referee, he kept the game flowing whilst still attaining discipline, not an easy task in such heated surroundings. Stockport Georgians looked the better side going forward in the first half and certainly deserved a 1-0 half time lead, the Hindsford lads were getting stuck in but there was hardly a goal scoring opportunity created in the first 45 minutes.

They received a verbal reality-check at the half time team talk just beside the centre circle. It must have had an impact because they appeared a lot more confident and cohesive on the ball during the second half, the Georgians found themselves under some consistent probing pressure for the first time in the match. The equaliser for Hindsford was a scrappy affair but very well deserved. This seemed to kick start a revival from the Georgians, who still had a chance to go second in the league tonight, it all helped to provide an exciting climax to a pretty decent game of football, I think I'll have some more of this Manchester League stuff come next season! 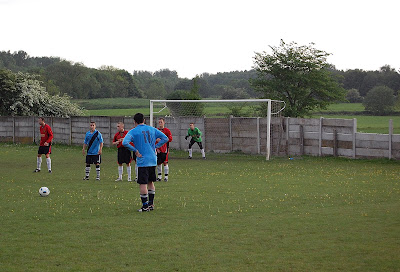 Wow, like the new layout! Nice report too. Good to have you back Uwdi.

Thanks Paul, hopefully I'll see you around the grounds next season.

Nice newn look to the site Uwdi - if you're going to venture further into the Manchester League my tip would be West Didsbury and Chorlton. They've just been promoted to the premier division, have a lovely ground in a v nice area (a ground of a much higher standard than the norm at this level) and plenty of ambition. A Vodkat League newcomer sometime soon.