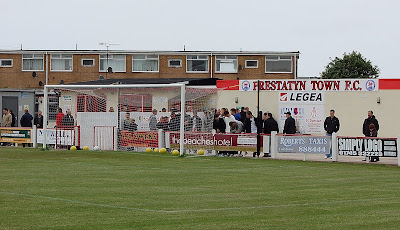 Where I live up on the Pennines it has rained on and off (more on than off) for the last 11 days (every single day), hard to believe some parts of the UK have been bone dry? Todays 'pants' weather forecast put the mockers on what could have been a nice day by the seaside. Even the North Wales coast got the rain, it also got a chilly stiff breeze blowing in off the sea, not deckchair stuff by any means, yet again I put my winter woolies and waterproofs on. Looks like summers been and gone. Frugal Glenn wasn't on board the Match Shed today but he'd endured a compulsory caravan holiday in Prestatyn a couple of years back so he'd given me a good idea where the Bastion Gardens Stadium was. Apparently he was so traumatised by the confined holiday sleeping arrangements and the relentless campsite 24/7 bingo he couldn't face being within 20 miles of the place. I think Prestatyn is a decent little place really. I made the journey in good time travelling down a remarkably quiet M56, skirting north of Chester and then taking the coast road down through Flint. I was soon walking beside the open green leisure areas adjacent to the ground. 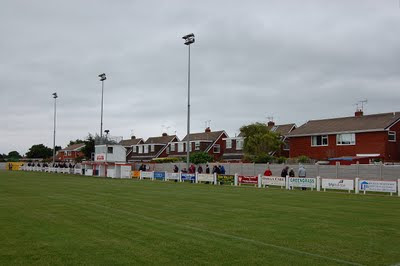 5 minutes further on I was able to take in the majestic view of the expanse of the Irish Sea as it stormed in on mile upon mile of golden sands, peeping through the broken rain clouds to the south lay the neighbouring resort of Rhyl, beyond that, even further in the grey distance rose the mighty peaks of Snowdonia and the coastal precipice of the Great Orme down at Llandudno. It all looked pretty good in these damp conditions... I wished I'd been lucky enough to see such a view on a sunny day. As I walked back to the ground you realise the football ground resides side by side with Prestatyn Cricket Club (not a bad little cricket ground), its amazing how many football grounds I've been to this season which lie right next to local league cricket pitches. My research for todays game ascertained local media opinions that this was Prestatyn Towns biggest and most important game to date. The clash against classy Welsh Premier League rivals Port Talbot Town was billed as a Europa League Play Off Semi Final, there was no second leg, todays winners would meet the winners of Neath v Aberystwyth Town next Saturday in the Final. Whomever won that final would gain entry to the qualifying stage of the Europa League, who knows where that might end? My mind boggled at the dream like vision of Prestatyn going 3-0 up against Spurs next February? Lets not go there. After sauntering over the nice green field to the seaside-side entrance gate I couldn't help overhear one of the stewards reading the match programme and conversing with the gateman in the admission hut "How the hell are we going to afford European Football" he said, I suppose there's no pleasing some folk? 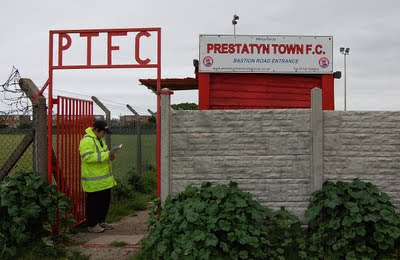 Perhaps he wanted Prestatyn to concentrate on the Premier League (the Welsh one of course). I paid my 7 quid admission money and also got a decent little programme, it included some good news and views, colour pictures and a rather entertaining column titled 'On The Ball With Robbo Goch', I liked Robbo's jottings and wished we could have more writing like his in match programmes. The programme also advertised a clubhouse evening with Tommy Docherty on Saturday 18th June, you get a 2 course meal and a free glass of wine for £20 a ticket, I bet even Frugal Glenn would have jumped at that opportunity if he was back in that caravan park. It was some time since my  morning breakfast of scrambled egg, bacon and toast, I hit the Tea Hut as soon as I got to the clubhouse. Its one of those interior type Tea Huts you see in quite a few clubhouses, this one was positioned in the spacious entrance reception room leading onto the packed bar area. I opted for a cornish style pasty and a cup of tea. Both hit the mark and I've no complaints, good service too, the ladies behind the counter dealt with all the punters promptly and efficiently. Whilst I was scoffing the pasty I took time in reviewing the layout of the ground, basically the only viewing structure at the ground is down one of the touchlines, a low level all seater stand which has 3 rows of bucket seats.

A slight negative is the number of stanchions which appear at regular intervals. Behind the north end of the ground resides the clubhouse and changing rooms but the rest of the ground is just hard standing. There is the standard WPL tv gantry positioned between the dug outs on the touchline opposite the stand. The low level setting doesn't offer fantastic character and I suppose the ground is rather open to the elements blowing in off the sea but it is a pleasant enough place to watch decent quality football. Port Talbot brought a bit of support with them and 20 or so of their more vociferous followers took up a first half position slap bang next to the dignitaries VIP section, perhaps it was the drummer, or perhaps the trumpet player, or come to think of it, the swearing that brought along a couple of local police officers to shadow the proceedings running up to half time? The away supporters looked harmless enough and it wasn't long before the police relocated themselves to the Tea Hut room for cups of tea. The pitch looked in great condition for the end of season but that stiff breeze was definitely favouring the side kicking towards the clubhouse end. In the first half this favoured Port Talbot, they more or less completely dominated the opening 45 minutes of play with precision passing and creative movement going forward. 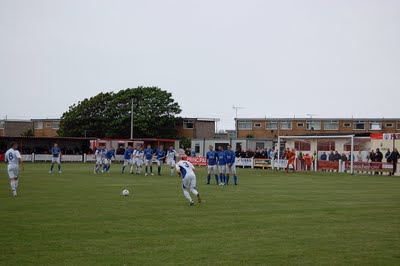 Prestatyn looked like rabbits in the headlights, surely it was more than just the conditions, they simply couldn't get in the game. The inevitable opening goal went to Port Talbot in the 29th minute via a Lee Surman header, Prestatyn could count themselves lucky that they went in at half time only 1-0 down. Port Talbot had bossed the proceedings completely. 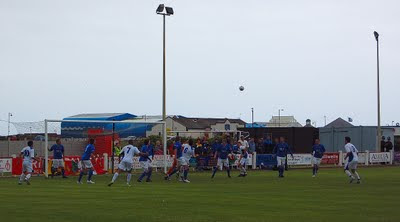 During the break I eventually tracked down the singular toilet facilities at the stadium (not easy I may add), they consist of one urinal and two traps only! Needless to say a pretty long queue of nervously hopping males had gathered in dire need of assistance. This is something the club should improve sooner rather than later. I eventually gave up the long queue and went back during the second half (it was the only way). Apparently, Neil Gibson the Prestatyn player manager gave his side a major rollicking at half time, it must have helped as they came out a totally transformed side for the second half. 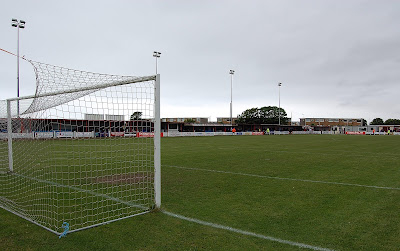 Instead of Port Talbot carrying on where they left off they surrendered both territory and midfield possession of the ball, the home side moved forward and expanded confidence with each passing minute, within 10 minutes of the restart Port Talbot looked like a bunch of holidaymakers with dodgy buckets and spades trying to stop the tide coming in, Prestatyn were all over them. The transformation in ascendancy came to fruition in the 84th minute when Paul O'Neill was hampered in the box and Lee Hunt smacked in the penalty. It looked all set for extra time and a delayed getaway, one bloke near me was moaning he would now miss his 5 'o' clock Sunday dinner, he need not have worried, up stepped Prestatyn Town captain Dave Hayes to head home an 88th minute sensational winner. The place went mad.

What a turnaround, I would never have imagined a side as dominant as Port Talbot in that first 45 minutes now being so clinically over-run by a gung-ho Prestatyn side who simply took the whole game by the scruff of the neck and made it happen. What a fantastic victory for them. Since full time I've learned that Prestatyn now face Neath away at 'The Gnoll' next Saturday in the final, it should be quite a game.
Posted by Uwdi Krugg at 20:43

Best post of the season. Obscure, distant ground with silly sponsor's name and playing in the ludicrously early stages of a major competition. Now that's what I call bags of novelty. A well spotted fixture, Uwdi! Great pic of the guy reading the programme too. Pic of the season, in fact.

Thanks Paul, I enjoyed the visit, shame the weather wasn't a bit better. The opening rounds of the Europa League should be kicking in around the same time as next seasons pre season friendlies, worth keeping tabs on them.