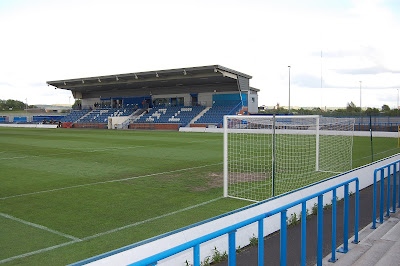 This NWCL Challenge Cup Final was held at the initially impressive but chronically concrete Tameside Stadium in Ashton Under Lyne, probably better known as the spacious home of Curzon Ashton FC who ply their trade in the Evo Stik Northern Premier League. Two of this seasons Vodkat North West Counties League main shakers contested the prestigious event, New Mills the Premier League champions and the battlers of Winsford United who finished a very good season in a creditable third position below them. I'd seen the classy New Mills outfit 'just about' get past 'never say die' Runcorn Town in an end to end quality semi-final on Saturday. Winsford had seen off impressive Division 1 league champions AFC Blackpool 2-1 in their respective semi-final. It looked like we were all set for a ding-dong dramatic final (at least on paper). I'd willingly scoffed down a rather large chicken roast dinner with all the trimmings before setting off for the game and I was soon steering a slightly lopsided Match Shed down towards the Frugal Glenn pick up point outside Booze Busters down in the town. Frugal was even more grumpy than normal as he struggled to get his seat belt on, he'd apparently had a row with his wife and hadn't had his tea. Instead, he was carrying 2 bags of cheese and onion crisps, some past the sell-by-date scampi fries and a milky way. 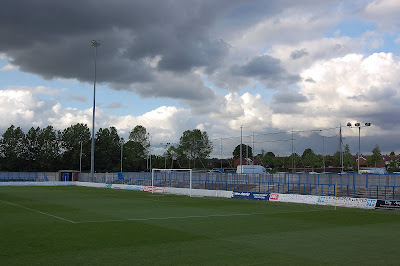 The Match Shed hit Ashton Under Lyne a full hour ahead of schedule, the anticipated rush hour traffic in this eastern part of Greater Manchester never happened (perhaps a sign of the times in coalition doomed Britain). The question was what to do with all the spare time running up to kick off? Its not as if there is a great deal to do once you've parked up in the large Tameside Stadium car park. We decided on paying in and trying out the Function Suite Bar. There were already 20 or so New Mills 'dressed' punters in the room and 1 bloke with a Winsford top on. We got our drinks and sat at one of the big circular wedding reception tables specially fitted out for tonights game with sticky plastic table cloths. The place gradually filled up with a 75/25 mix in favour of New Mills supporters, a ratio which more or less matched what we saw in the stadium when we took up a couple of seats in the Main Stand (no extra charge). The opposite covered terrace across the pitch had been adorned with various New Mills flags of various sizes and quality, perhaps they dont do flags in Winsford, they didn't have any (not even for cup finals). The tannoy was apparently sponsored by Deaf Aid for the night, the last time I had my ears ringing like this was at a 'Who' concert in the 70's, talk about loud, to make it worse they played the absolute worst disco pap music you could ever be so unlucky to suffer, the music was so bad I wondered if it was some kind of pyss-take? Frugal Glenn was financially admiring how the sponsors Vodkat had taken up the in-charge spirit of cutting anything in sight, including the budget for cup final night trimmings, no nice looking girls in skimpy costumes, no fireworks, no give away free samples of dodgy coloured alcoholic liquid, all Vodkat produced was a three foot cardboard advertising board next to the centre circle. It sadly appeared about as much effort had been given to the flimsy 12 page match programme which they fleeced people £1.50 for, damn expensive pen pictures and a couple of cheesy adverts me thinks (because that was more or less all that was in the so called cup final programme), nice old school cover though.

The game started with a flurry of New Mills attacks and Winsford looked all at sea, that first 10 minutes proved crucial to both sides, New Mills failed to get the early goal they had obviously set out for whilst Winsford gradually calmed down and slowly balanced the ship. Sadly after that, apart from a long range Winsford shot which rattled the crossbar, the rest of the first half was very scrappy and devoid of decent football. Winsford were proving to be stubborn opposition for the normally open 'free-flowing' tactics of the league champions. A half time snack attack in the Tea Hut below the main stand was a complete non starter, the queue was massive. Frugal Glenn stuck it out for a cup of tea (probably due to the excessive salt content from all his crisps and stuff) but he was gone for twenty minutes. We stood on the covered terrace opposite the main stand for the second half but it was a bit breezy and quite chilly. Despite all the New Mills flags, there appeared to be more Winsford United supporters over here and they were well voiced in getting behind a much improved side in that second period. Winsford seemed to want the ball more and it was obvious New Mills didn't like the buzz and bite of the proceedings, the normal pacy passing game adopted so often by New Mills was nowhere in sight, it all looked a bit hit and hope, dare I say it...long ball. 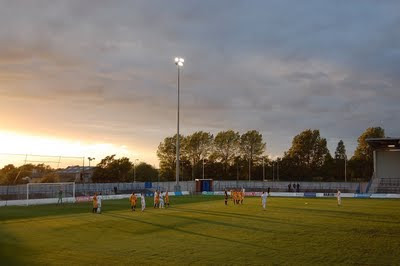 It was Winsford United who started to play the better football and more and more possession created more and more chances. The break through came with about 15 minutes to go, a Lee Duckworth free kick 25 yards or so out on the right flank skipped past static defenders and keeper alike to send the Winsford players into leaps of unbridled delight, they were 1-0 up against the bookies nailed on favourites. The expected New Mills fight back spluttered and chugged and never got into gear, if anything its a wonder Winsford didn't go further ahead. New Mills went down to 10 men near the end when Luke Horrocks hastily retaliated to a firm challenge by throwing the ball at his opponents head, his second yellow card meant he had to go. A couple of clear chances fell to Winsford deep into injury time but it wasn't to be, not that they bothered, they'd deservedly won the cup and given their small band of supporters a great deal to cheer about. Well done Winsford United!
Posted by Uwdi Krugg at 17:39