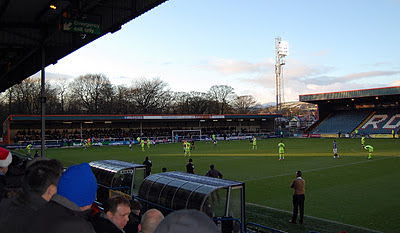 The snow and ice returned to the North West this week, nothing major, a slight covering and temperatures down to around -2 but it was enough to activate a string of local postponements in non league circles, my first choice planned fixture was Maine Road v Stone Dominoes, sadly it got the call-off. It was damned decent of new Tea Hut crew member 'Ron Atkinsons Neighbour' to kindly put me in receipt of a free ticket for (what he described as) one of the big league matches of the day, I was somewhat surprised to find out it was for Rochdale v Yeovil Town (the true Barcelona of mid Somerset). 'Ron Atkinsons Neighbour' is called what he's called because he once lived a couple of streets away from Ron Atkinsons house when Ron was Manager of Manchester United, he's wined and dined on the fact for years (the neighbour not the actual Big Ron). Anyway 'Ron Atkinsons Neighbour' is still doing a stint at an open prison for his part in a massive fake underpants scam (which may be a touch over glamourised from his part) so he passed me his annual Goldbond Lottery Members free ticket for Rochdale Football Club which he gets from his cousin who does the lottery but hates football.

Dale give free entry for one game each season to all Goldbond members. Frugal Glenn was none too happy I was given this treat, he flatly rebuked my suggestion that he was still welcome to come along so long as he paid in "I'm not paying 20 quid to watch that shower of shyte" was his carefully worded polite response. After years of not catching Rochdale in action this would now be the third time I'd seen them in one season, they'd yet to score in my presence, never mind win! I watched them lose at Bradford City in an FA Cup 1st Round tie which they deserved to win, and then last week (courtesy of reduced admission prices), I witnessed them easily surrender at Sheffield United's Bramall Lane. I parked the Match Shed at the side of a walled bowling green just the other side of Edenfield Road and after five minutes of a dodgy walk slipping along icy footpaths I was outside the Spotland Stadium, a much respected ground often given good feedback from away fans all around the country. Small groups of Yeovil supporters were huddled over brimming trays of Pie, Chips and Gravy from the Willbutts Lane chippy which is positioned smack bang opposite the away supporters turnstiles. They proudly wore their green and white hooped replica shirts, one fat lad was already struggling to wipe clean a green/yellow smear of English curry sauce which smeared over the stretched nylon. There must have been about 60 odd Yeovil supporters that had made the long journey up from Somerset, apparently the coach set off at 7.30am that morning, for a struggling side just dumped out the FA Cup by non league Fleetwood Town that is some dedication to the cause. As I arrived at the Main Stand turnstiles around the other side of the ground (where Ron Atkinsons Neighbours ticket was designated) I was surprised to find them still shut with small disgruntled queues forming, it was 2.30pm! A horde of out of condition stewards in skin tight high visibility clothing sweated off the pounds as they shovelled out spade fulls of second class grit onto sheet ice in front of the turnstile entrances. Surely something they should have ascertained as a hazard a good while sooner than half past two? Especially the ones with big labels on the back of their jackets stating Superior Chief Health and Safety Director (have they never heard of a basic risk assessment)? Even those hard drinking drug induced bonzo's from the Rochdale Youth Orchestra couldn't get access to the stadium!

They set up an impromptu free gig in the Directors car park instead, it was great to hear those old Hawkwind and Black Sabbath classics again, all credit to some of the Dale Pensioners for getting into a bit of rough and ready headbanging as well. As soon as I got in the Stand (unreserved seating only) I bumped into Grinton Borrington who also does a bit of groundhopping in between his commitments in the antiques and collectables business. Grinton loves a drink and quickly produced half a pint of rum in a plastic coke bottle, I politely refused a tipple due to Match Shed considerations but Grinton already appeared decidedly half cut. He'd been hoping to watch Warrington Town v Lancaster City but it had been postponed. I did hope he would behave himself, he said he'd got the nod from a couple of female Dale supporters in the Church Inn pub beforehand, then it all went pear-shaped when their husbands came back from the bar? He'd had to leave his pint. As regards todays crucial game, both Rochdale and Yeovil are having a very lean time. Dale can count victories on one hand. Manager Steve Eyre is under a lot of pressure from loyal fans who suffered for 40 years to get out of the basement division, they now look destined for a 'wimp-like' prompt return. The previous boss who 'did the business' in getting them promotion to League One, Keith Hill, has moved onto Barnsley FC and Steve is struggling to make his mark in football league management without many of the good players that have also moved on, either through transfer sales or the conclusion of key loan deals. Steve Eyre was in charge of the Manchester City youth set up and the Rochdale board presumed he would be the ideal candidate to further the Dale dream of establishing themselves at this higher level, it hasn't happened (yet). In defence of Steve Eyre his signings have had to be extremely careful, the squad appears untested, young or in some cases too old, there are no dependable, quality tried and tested successful players to call upon, true, players like Jason Kennedy and Gary Jones can do the business in the centre of midfield but the defence looks flimsy, even a bit slow and there is a serious lack of a threat upfront, the forwards seem young, nervous and lacking in presence. 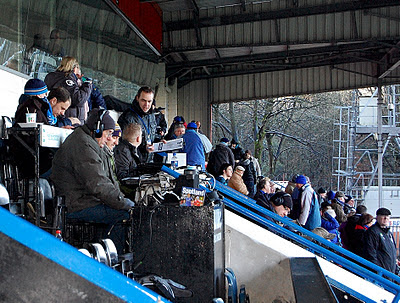 As for Yeovil, it was great to see Darren Way on the pitch again, although this time as a coach rather than the excellent 'midfield-general' he once served the Glovers as, Darren had a bad car accident and has done really well to return to the game. I remember always choosing Darren Way and his Yeovil midfield partner Lee Johnson in my Football Manager PC game squads no matter who I was in charge of (great players). The current Yeovil side are struggling, Terry Skiverton is doing his best as Manager but confidence appears a bit low as to how they will get out of this slide, todays game against Rochdale is one they could simply not afford to lose. Back to what was happening off the pitch... Grinton finished the rum 10 minutes into the first half and said he needed the bogs, I never saw him again! Perhaps he spotted one of those married women from the Church Inn?

On the pitch Rochdale were taking the game to Yeovil and there was plenty of sharp inter-play between Akpa-Akpro and David Ball coming in from the left while Nicky Adams danced down the right, Harry Bunn was holding up the ball upfront and it only seemed a matter of minutes before Dale would score. Yeovil thought otherwise. The Somerset side soaked it all up and played out the game plan, sit back, defend in numbers and hit them on the break (unfortunately for the neutral there wasn't much hitting them on the break, in this match at least). Akpa-Akpro hit the bar, Dale kept creating chances but it often seemed the younger players were trying to walk the ball in the net, frustration reared its head and at half time it was 0-0. I'd had a pre match dinner back at the house, this consisted of a Pukka Steak Pie and Beans, to be honest, I was still pretty full. I went along to sample the Rochdale Tea Hut with a view to sampling a burger or something more than puff pastry and the like.

What I found was a massive long queue of gigantic proportions, I asked a bloke ahead of me "what are the burgers like here"? "Its only pies, pies, pies here mate" came the reply. I went back to the stand, I sat in the other end that Rochdale were attacking for the second half, there was bugger all to watch in the half Yeovil were facing! The second period was a copy of the first, more Rochdale pressure, odd periods of highly skilled inter-play, odd periods of dross, a few clear cut chances and lots of hit and hope. 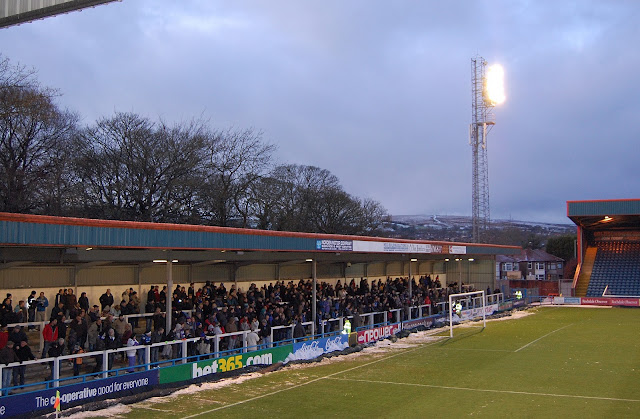 Perhaps the true man of the match was Rene Gilmartin the Yeovil keeper, he was fantastic the whole game, he pulled off some wonderful saves time and time again (poor lad even suffered a dislocated finger and had it fixed there and then on the pitch), he just carried on regardless, a great performance. The icy cold chill set in for the last twenty minutes or so, it was painful to sit there to be honest, it was bloody freezing, I longed for the heater of the Match Shed.

It all ended all square 0-0, I reckon Yeovil would be a lot more pleased with the result than Rochdale. Dale needed 3 points from this game, if they cannot beat teams like Yeovil (no disrespect intended) especially at home, one has to wonder where they will gather enough points to remain in this division? Rochdale go to Tranmere on Boxing Day, that looks a lot more difficult than what was on the menu today. I just hope somebody will buy Steve Eyre a nice warm coat for christmas. Why does he only wear a jumper on the touchline when its obviously bloody freezing? Get a duffle coat on man! 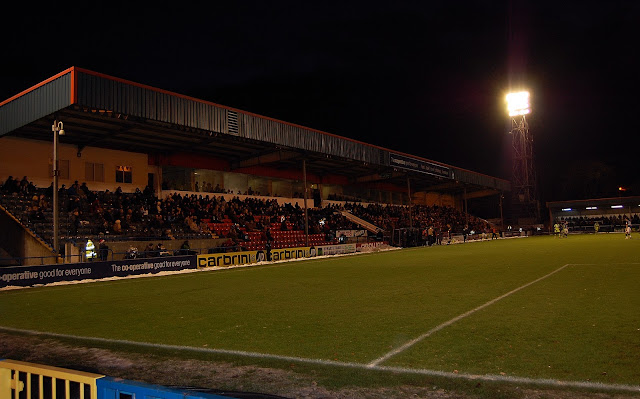 ﻿Update as of Monday 19th December: Rochdale AFC today sacked Manager Steve Eyre and his Assistant Frankie Bunn. It appears the Yeovil fixture was a game too far.
Posted by Uwdi Krugg at 19:23