Football is being ruined

I am sick and tired of habitual divers and inept, incompetent referee's continually disgracing the game of football.


The pathetic (rancid) examples witnessed during Manchester United v Aston Villa and the FA Cup Semi Final between Spurs and Chelsea emphasise how far todays (sordid) game has slid down the toilet.


No wonder people don't go anymore, a lot don't even watch it on TV.


One has to question whether it is time to find something more honest and morally appropriate to enjoy than the maggot-ridden (corrupt) world of football?
Posted by Uwdi Krugg at 10:57 1 comment: 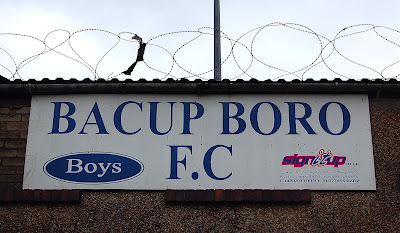 I've had a love-hate relationship with Bacup Borough over recent seasons. They have a charismatic ultra rustic ground on top of the hills above Bacup and when the sun is out there are some stunning views to enjoy, a great place to watch non league football. However, when there is a bit of dodgy weather about, particularly rain, they drive me mad with the uncertainty of whether the game will be called off or not, I've been here before when a late postponement has sent me home fuming after a wasted journey. I think I've been harsh on Bacup in criticising them, especially when you get in the ground and you appreciate just high up on the hill the place is and you then take in the significant slope that runs down from the farmers field touchline. It must be murder trying to drain this pitch, I owe you an apology Borough, I'm out of order for being unrealistic about how harsh the landscape is up here.

Anyway, against all the odds today, the game survived some absolutely awful weather, it had been raining quite hard since the early hours and already a number of NWCL matches had been called off elsewhere, I had feared the worst but the NWCL had twittered that the game was on, I made a phone call to the club just in case, at 1.20pm they confirmed the match would definitely take place. Well done Bacup. Todays game was vitally important in the sense that the snazzy visitors from Ramsbottom were league leaders (just), they were just in front of a hard-chasing Runcorn Town who had a game in hand, Rammy needed all 3 points today and with Bacup in a cup semi-final on Thursday, their large travelling support seemed mighty smug of the outcome. Frugal Glenn was back in the Tea Hut squad for todays game, he's been missing for a while due to moving house, plus the fact that he's now got 3 Indian takeaways just down the road and he's been blowing his spends in them not just at evenings but dinner times as well! I advised him on the importance of a well balanced diet. We were in the ground at 2.30 and rather than get wet soaking through too early we went in the wonderful Martin Peters Sports Bar just behind the nets. I had a pint of Becks at 2.85p. The place was pretty packed and everybody appeared well-up for the match. 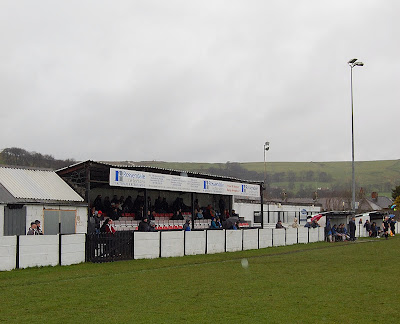 The ground offers some protection from the rain in the format of an attractive little seated stand down by the corner flag, a covered terrace on the opposite touchline beside the halfway line and finally a bit of a cowshed type kop behind the goals at the far end of the pitch, this has been blocked off in recent times but it looks like the club are doing some work to the standing area under the roof and today there was space to stand at the front nearest the pitch. 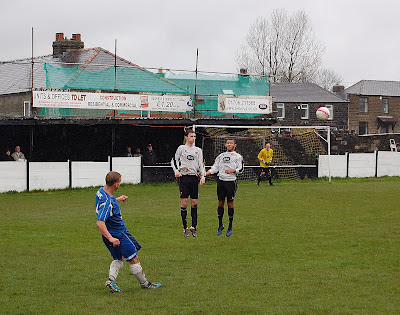 Me and Frugal had economy-brollies so we stood in the open near the halfway line adjacent to the changing rooms. The rain was relentless but the pitch seemed to be holding up and we were quickly into the action. Bacup put pressure on the visitors straight from the kick off and got right into their faces, the fancy dans from Ramsbottom didn't like this one bit and seemed a bit rattled. Bacup got a few clear cut chances but fluffed them, this would prove extremely costly as Rammy slowly but surely dug in, held their positions and started to move forward. 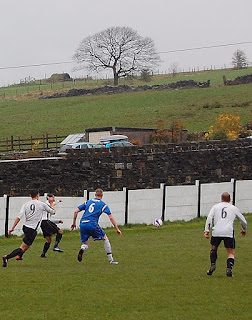 They won more of the 50-50's and began passing around the chasing Bacup players, without creating too much up front Ramsbottom looked the better side by half time, Bacup lacked the cutting edge with which they started so brightly. It was back to the shelter of the Sports Bar at half time, Frugal Glenn got a 50p Bovril which he confirmed was the best he'd had all season, I got a soup for 80p, I think it was golden creamy vegetable or something, anyway, I didn't think much of it, it was a bit tasteless. I did think about having a portion of the famous Premiership Pie they serve from the kitchen, lots seemed to be trying it but I'd had a big dinner so I gave it a miss, maybe next time? The bar area was crammed full so we stood near the door next to one of those big fancy fruit machines with flashing lights. Frugal was taken aback when the thing started talking to him! "Hello... how are doing?" He nearly spilled his bovril "Its a lousy day isn't it... did you sit in the stand?" It was only then he realised that with the bar so full some bloke had wedged himself behind the machine next to the exit door on a small stool, he was talking on his mobile phone to somebody! The look on Frugals face when at first he thought the machine was talking was a picture. 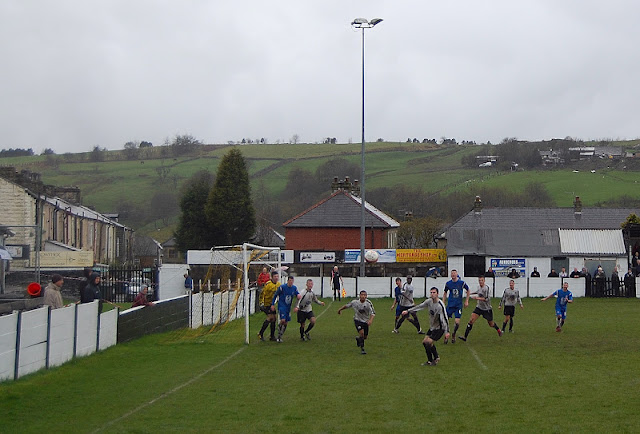 The second half of the game was totally dominated by Ramsbottom, they more or less camped out in the Bacup half as the pitch got wetter, heavier and much more slippy. To their credit Bacup were hanging on for a draw and mopped up attack after attack with some resolute tackling. News had filtered through that Runcorn Town were getting beat in their local derby with Runcorn Linnets, it seemed to inspire the visitors to go all out for the 3 points, still Bacup held on. When the winning goal came it was through luck rather than craft, a shot from the edge of the box appeared to be covered by the Bacup keeper until the ball hit Grant Spencers backside and diverted its path into the empty net, cruel on Bacup but it was nothing more than what Ramsbottom deserved. When a Bacup forward was sent off for a rash challenge the game was up, Ramsbottom nearly got a second when Bernard Morley hit the post but Bacup were well spent in any case. A crucial away win for the league leaders especially as news came in that Runcorn Town eventually lost 2-1. If Ramsbottom United win their last 3 games they win the league, Runcorn Town would not be able to catch them. Should be an interesting end to the season?
Posted by Uwdi Krugg at 15:35 2 comments:

Back from intense sealed-wallet surgery, Frugal Glenn joined the Tea Hut squad for a traditional Easter Monday up above Bacup Borough's ground high on the Pennine hills, the welcoming holiday weather didn't let anybody down either.... it pissed it down! Visitors don't come much more hyped than the North West Counties Premier League leaders Ramsbottom United and what a battling performance they provided against some pretty stern defending from the locals. It was all splish, splash, splosh as the Rammy galactico's soaked out a vital 3 points from a 1-0 away win.

Visit report scribblings will be posted on here sometime Tuesday (I hope).
Posted by Uwdi Krugg at 20:52 No comments:

As per the first half, Rochdale caught Nelson cold at the start of the second half and went 2-0 up, according to the Nelson regulars there was no chance of them coming back from 2 down? They were right. Rochdale ended up 3-0 winners and looked mighty pleased with the points. Back to the drawing board for Nelson but you cannot fail to admire the spirit in which they play the game, I can see why some of the small band of supporters just keep coming back for more.
Posted by Uwdi Krugg at 18:37 3 comments:

Return of the Tea Hut!

The Tea Hut is back in business and it was North West Counties Division 1 stuff leading the way. A jaunt over to Nelson Football Club to be exact. A visit report will be on here sometime Sunday evening.
Posted by Uwdi Krugg at 19:53 No comments: