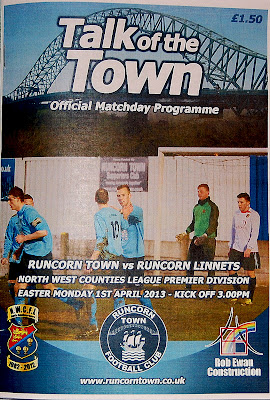 I'd persuaded Frugal Glenn to come out of exile for this massive local derby, he's always had a soft spot for Runcorn Town ever since he came along to see them in a classic end to end NWCL Challenge Cup semi final at New Mills. I got the tight sod to pay me in as recompense for the 100 mile diesel costs, having got in for free (so to speak) I splashed out on a programme from Big Kev and even had a go on Stephanies £1 football card, when I extended the rash spending spree to a cup of tea Frugal Glenn was absolutely fuming. I couldn't miss buying something from the newly titled tea hut which has opened on the far side of the ground, they've named it 'Heres The Tea Hut' which I think is in response to the title of this blog, fantastic stuff! The new hut first opened for the Vase match against Walsall Wood and compliments the main hot food outlet in the clubhouse beside the dressing rooms. 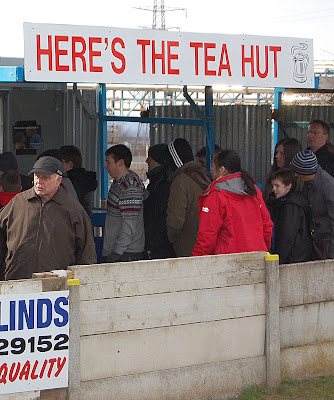 The lads in the Tea Hut had their work cut out as hordes of eager Linnets Supporters descended on the place, it was like a scene from Rorkes Drift as the tiny Town Tea Hut was besieged by hundreds of Zulu's (or in this case people in rather garish yellow and green hoops). I've always likened Runcorn Town to the Brazil side, their superb fast flowing football with clinical passing and decisive finishing reminds me of the 1970 World Cup winning squad. I know this is absolutely barmy to 99% of people. Lately I've had to agree with others that my silly claim that a NWCL side such as Runcorn Town are equal to the Brazilian national side is childish and stupid, especially after the way Brazil played last week in that crappy friendly with Russia, Town are miles better than the latest crop of Samba Boys! How nice to see todays pitch lightly sanded to typify Copacabana Beach, all we needed now was that Barry Manilow tune and Duran Duran singing Rio beside an impromptu barbecue behind the Toilet Block. Frugal Glenn felt dizzy after parting with 10 quid at the turnstiles so we had to sit down. What a mistake! We soon realised we were sat amongst all the Linnets fans and it was obvious from the start that they'd rolled out some of their very best one-eyed mega-moaning supporters. 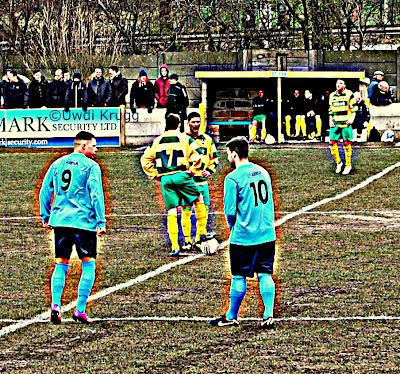 What is it with so many Linnets fans, some of them just love to belittle Runcorn Town in any which way they can, I know its not all Linnets people, some of them are very fair and open minded but me and Frugal got sat behind a couple of old blokes on the halfway line who just trashed everything to do with Town for the whole of the first half, the players, the pitch, the tactics, the ground, you name it they had a bloody good moan about it. You cannot help but say something in defence, which of course makes them even worse, they reckoned me and Frugal Glenn shouldn't be even sitting in the stand because it was meant for Linnets Supporters, eh? Unbelievable. It reminded me of the great album title Dark Side of the Moon. Needless to say we moved to the clubhouse side of the ground for the second half, not sure if Frugal realised how much it seems to hurt a lot of Linnets people to simply see their neighbours doing well.
Anyway, reflecting on the first half of football, my personal opinion was that it was a dog of a match, awfully scrappy and disjointed, both sides seemed edgy and nervous to play football, a few chances came at both ends including a nailed on Runcorn Town penalty when Phil Howard was fouled in the box, I suppose 0-0 was an appropriate scoreline at the break. 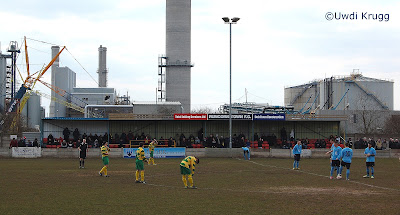 It was critical that Town took 3 points from this match, the pack of clubs around them at the top of the table, Maine Road, Padiham, Bootle and Winsford had all been picking up speed whilst Town could only manage a draw in last Saturdays tussle at defiant AFC Blackpool. The local fans were well up for it in the second half and it was a tremendous atmosphere behind Simon Burtons dug out. 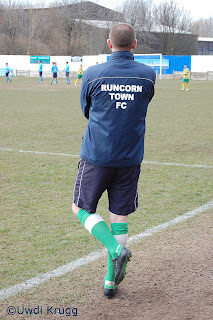 It was impossible not to get sucked into the passion of it all, not only was this a big local derby, the chance of keeping title winning aspirations depended upon it. Trying to be fair about the football on the pitch I think Runcorn Linnets appeared the more likely side to win this match in the second half. They reappeared from the changing rooms with more composure and drive and seemed to retain the ball a lot better than Town. The home side were snatching at things rather than playing their normal methodical football. When Linnets went 1-0 up as Towns keeper Karl Wills unfortunately collided with a post whilst handling the ball, a dark cloud seemed to appear behind the half built waste incinerator plant behind the far side of the ground. The big Linnets contingent in the big 665 attendance went mad with delight! Rather than throw in the towel, Town somehow found new spirit and faced up to the gathering gloom. 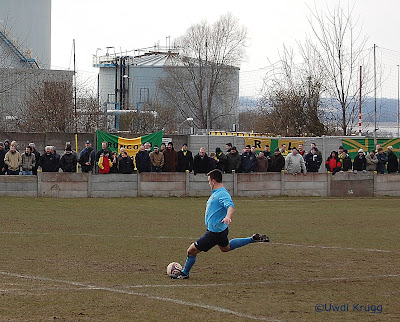 Whilst the told-you-so Linnets army danced with delight and threw their bobble hats in the air, Town got the ball forwards from the back and Paul Shanley brought a blinding flash of light to the proceedings.... Town had somehow managed to equalise within 4 minutes! It was the turn for the opposite side of the ground to erupt. I knew then that as good as Runcorn Linnets were (and they do have some very good players) Town would not be beaten, the question was could they calm themselves down and find some clinical passage of play to get the chance of a winner? With 15 minutes left of what was now a totally gripping second half Super Danny Dalton sent a Small Town From Weston to Dreamland! He rose like Thunderbird 1 to head home a second goal for Runcorn Town, Simon Burton the Manager was dancing on the pitch as normal blokes in anoraks punched the air like trojans on speed. It doesn't get much better. Linnets did all they could to spoil the party as everyone kept checking their watches. 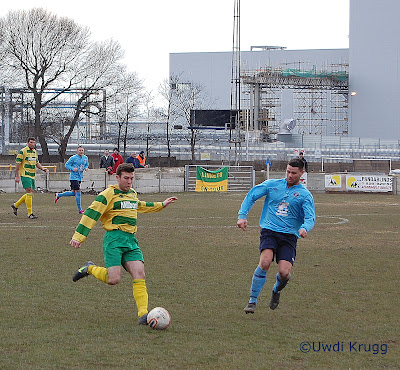 The opposition fans howled at the referee and the linesman down the far end of the ground, Linnets players were dropping like flys under harmless challenges and far too easily in my book, surely victory wasn't going to be denied because of easily influenced officials who bottled it amidst the baying mob? Town just couldn't keep the ball, Simon Burton told them to get it in the corner, there was only seconds left now... and then the referee blew and every Town supporter gave praise for victory! The big local derby had gone to Runcorn Town and the dream of the title still had a heart beat, a loss or even a draw could have proved critically damaging. I can honestly say I've not been so totally wrapped up in a second half of football for a very long time indeed, it was simply superb.
Posted by Uwdi Krugg at 00:25

Alan hospitality/travel manager RTFC
.couldn,t have described it better myself. They came.they saw .they expected. And We got the 3 points we needed. Enough said on the pitch and not in the stands by that
SMALL TEAM FROM WESTON

What a ridiculously biased post from a supposedly " neutral " ground hopper. Thats easilly the best way of over exagerating a goal from a typical Town long punt from the back and a header from a corner.

For a neutral, your report barely mentions the fact that Linnets probably had 65% of possesion and forced Towns keeper into more saves than Linnets, aswell as hitting the bar early on. Did you see any of Towns 1970's Brazil style football on Monday, no because they dont play like that. How can they on a pitch resembling the sand dunes of Formby beach. They do however play a very effective and pacey counter attacking game that works well for them, but lets not pretend its something that its not.

If you knew any of the history between the two clubs and some of what has been said from both sides of the fence then you would understand some of the animosity. And if you look at a forum called DYPAM, you will see the measue of some of Towns fans ( and Linnets also ).

Dont get me wrong, there are some great folk down there who I get on very well with, but equally there are people who like to slag off everything Linnets, exactly like you said you witnessed but the other way round, or did witness and chose not to write about it.

Sorry, I didnt realise you were actually a Town fan until I scrolled down the page and noticed that you have been to all of their games lately, offering similar blinkered responses, and you post on their Twitter feed with that picture of Christopher Lloyd.

So I can now understand why your post about Mondays game was so ridiculously biased.

I found the report fairly accurate apart from the fact only Town looked like scoring. Linnets had pssession but did little with it.
Both sides had there moments but Town looked more dangerous.
The constant diving and moaning from linnets was uncalled for.
They once again proved poor losers, poor sportsmen with a few fouled supporters who the manager praises, something is sadly wrong.