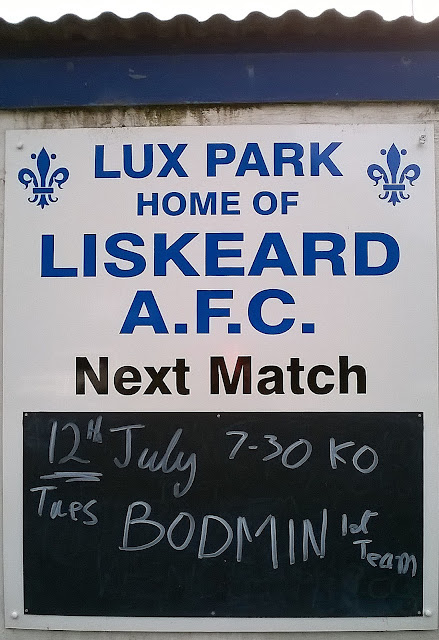 I like Liskeard. Nice unpretentious market town. Lots of charismatic buildings designed by Henry Rice the Victorian architect still adorn the centre. Its surrounded by lovely countryside and numerous pretty villages. I suppose you could add the football ground Lux Park to the list of goodies, you pass it if you're journeying up to Pensilva or St Cleer, its bang on the main road. Its got a quirky main stand with a few rows of planked bench type seating and across the pitch there is a covered terrace affording welcome shelter from the brutalities of what nearby Caradon Hill chucks down on it. To say it rains a lot here is an understatement.

The place looked in fine fettle amidst some rare July sunshine. I gave the gent on the gate my 2 quid entrance money and immediately admired the lush freshly mown green pitch. I hoped it would play as wonderful as it looked. Lux Park has had a bit of work done to it since my last visit here, they've put a long stretch of impressive concreted hard standing running from the main stand to the sports centre end which certainly gives that side of the ground a more dignified feel.
One of the jewels in the crown here is the old school tea hut come meeting room with some nice ladies serving up the goodies amidst walls covered in historic photographs from the clubs archives. As tonight was just a friendly game there only appeared to be drinks, sweets and crisps on offer, I had sampled a lovely pasty here on a previous trip but not tonight. I just had a cup of tea from the urn which was provided in a mug. A trusting gesture, I've been a few places when that mug would never be seen again, perhaps that could be why mine had a very feminine floral print on it, not much of a trophy for any wanna-be football ground pot collector. No wonder they all get returned to the counter again. 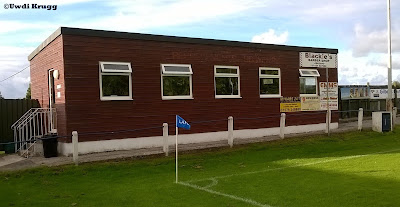 Tonights game featured a young Liskeard side who had struggled to keep pace with the leading pack in last seasons SWP Division 1 West, like it had been for many SWP sides the relentless rain and numerous postponements made decent form and consistency a mighty hard objective to achieve. Liskeard were certainly up against it tonight, Bodmin Town did the treble last term besides having a decent run in the FA Vase, they are rightly recognised as a very good side in the South West Peninsula League and rumour had it they were putting a strong first team out tonight.
We kicked off with a sparse crowd in attendance, for some strange reason this more than doubled after 15 minutes, I got the impression 50 odd blokes were hid in the bushes across the road just waiting for Owd Ned to toddle off from his turnstile hut. Not that I can imagine a 2 quid admission saving going very far in summertime Cornwall.

The young Liskeard lads almost matched the confident Bodmin 11 for the first half. The visitors showed their class with some clinical unflinching finishing to take a two goal lead back to the dressing rooms. The second 45 minutes were all Bodmin as the strategy, work rate and cohesion made its mark. Time and time again they created openings and tested out their shooting, credit to the Liskeard keeper for keeping the score down to 5-0, it could have (and should have) been a much bigger margin. 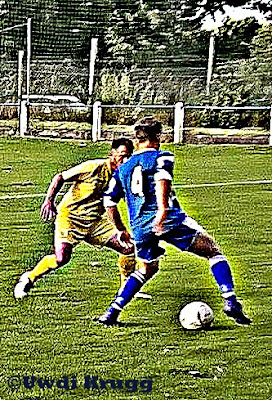 These are purely leg stretchers and give a test run for tactical exercises so nothing too serious can be read into the proceedings. I will say I was still impressed with the quality of football Bodmin played, they certainly have some good players. I may be totally wrong about this as my research is sketchy at the moment but Bodmin had a guy with red hair playing tonight nicknamed Sully, who could be (according to the excellent SWP website player-movements) Dan Sullivan ex Plymouth Parkway? My apology if I am incorrect. Have to say this Sully chap had an absolute stormer of a game and looks a very good player indeed.
All in all it was a pleasant evening of football and it actually stayed dry, which is a bonus for SWP football in recent times.
Posted by Uwdi Krugg at 18:16