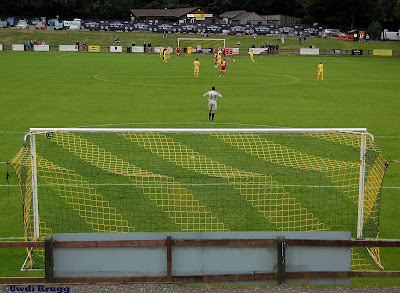 These two had drawn 1-1 at Bidefords place last Saturday. The Southern League Division 1 South & West side had struggled to break down a gallant Bodmin outfit who played 77 minutes with 10 men. Now back at Priory Park in South East Cornwall, the odds of a Bodmin victory seemed much more favourable, irrespective of lower league standing.

There's something magic about a hot take-out from the pitch-side Tea Hut as the floodlights dance amidst the sizzling fat and the cups of budget brand tea. Trouble was I'd caved in an hour earlier and had a gut buster tea back at home. I had no spare tankage for the voluptuous volumes of match night grease but its fair to say plenty of other susceptible punters did, the refreshments shack (I call it Tea Hut) was doing a roaring trade. The picture has been doctored to protect people who should have been at weight watchers. 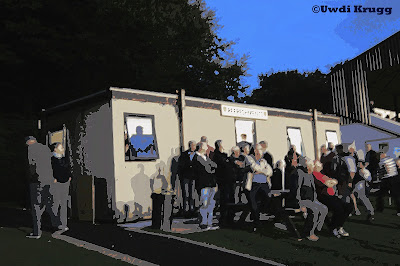 Priory Park is easy to spot on the main road into the town from the big A38 & A30 junctions, look left going down the hill after passing Morrisons on your right and there it lies like a genuine refined jewel in a fake gold crown. The jewel is the tall singular grandstand which resides majestically across the halfway line, its charismatic presence denying the inevitable choice of so many other non league grounds in this day and age. No flat-pack steel plate economy stands at Bodmin Town, they have a proper one that must be the envy of the South West Peninsula League for miles and miles and miles. 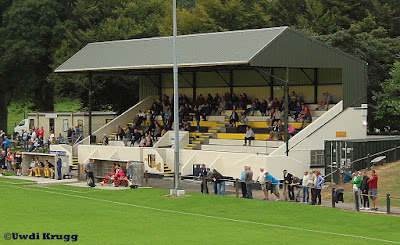 The game appeared to be on Match of The Day but I couldn't pick out Gary Lineker and Shearer, probably having an Indian in the Viraj... then somebody murmured that it wasn't the BBC MoTD Crew, it was the Cornwall Channel? 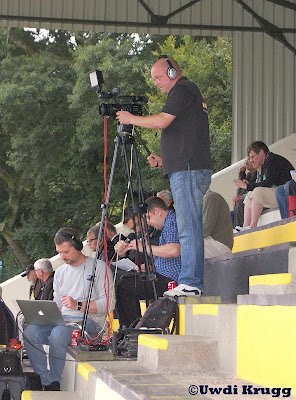 Bideford were kicking to the Morrisons End early doors and their colourful boisterous band of X-Factor pub singers made a gallant attempt to resemble a Liverpool away following at Old Trafford. No, it didn't quite come off but you had to respect their efforts to inject a bit of atmosphere and passion into the proceedings, most of the ditties appeared fairly polite but I hadn't heard reference to Bodmin people being 'Dingles' before. They later followed this up with that old Scout Show favourite "You're F*cking Sh*t" which always goes down well with the Mums and Dads.

The match itself was very good in my book. Both sides played attractive attacking football with the odd lunge, push and grapple chucked in for good measure. Something the busy referee didn't seem to favour too keenly as no less than 3 players got the red card. Bodmin took a 1-0 lead with a well directed header from Jake Ash just before the break despite the earlier sending off of Nick Milton meaning they played a lot of the first half a man down. The second half didn't quite reach the heights of its predecessor. Bodmins Dan Sullivan had picked up an injury which was negating his movement, up until then he had produced a stormer of a performance, his creativity being the perfect foil for Steve Bowker up front. When Sully had to come off Bideford got the freedom to up the gears and pushed a tiring Bodmin defence back towards goal. James Richards got the equaliser on 77 minutes and there was no hiding the fact that Bodmin were hanging on for extra time. The eventual winner, when it came, was the result of an unfortunate misplaced back pass, Bideford fully capitalised on it and on 85 minutes Billy Tucker put the  pub singers in FA Cup dreamland. 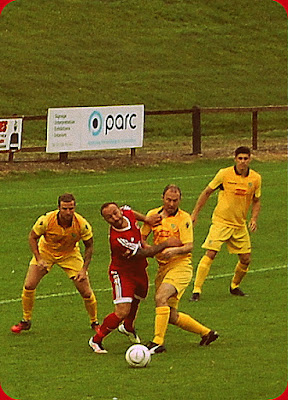 Flat caps and half eaten sausage sandwiches bit the dust as the Bodmin faithful knew the game was up, the Wembley dream was over.

Love that Main Stand though.