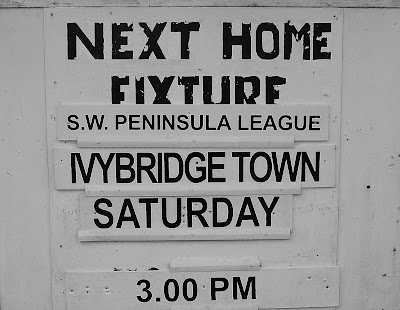 The wife hates football. I've given her a nickname... Match Cow. She likes visiting the different locations when there's the chance of some decent shopping but that's as far as it gets. Last time I persuaded her to attend a game, she read a magazine, consumed a family bar of chocolate then fell asleep. So today Match Cow came along with me to the lovely market town of Tavistock just over the Devon border from Cornwall and I parked the Match Shed up in a reasonably priced 2 quid town centre car park. Match Cow shot off to the market with her shopping bags and I ambled down the pleasant River Tavy riverside walk towards Langsford Park.
The Lambs finished 3rd last season behind St Austell and champions Bodmin Town. Rumour had it that Tavistock could very well improve on that 3rd spot this time around. I was looking forward to checking them out in what was an attractive looking fixture against Ivybridge Town who ended the last campaign in 9th position.
Langsford Park is a modern looking set up with a big clubhouse set back in the club car park, the Red and Black Club. I had no time for foaming pints of local ale so I handed over my 5 pounds admission money and an extra pound for a colourful looking programme. I'm saving my OAP concession-buster disguise for night matches so I'm paying the full whack at the moment. That programme I've just praised turned out to be 2 sheets of A3 glossy paper with a couple of staples for good luck, inside was a match report from a recent friendly, the two squads for todays match, 3 full page adverts including cut price furniture and digger hire and a few generic match photo's without reference of who, what or where. Ok I only paid a quid for it but this really was a mickey take and took me back to a time when I simply stopped buying non league programmes because they were nothing more than a rip off. I'm hoping the rest of the SWPL clubs offer up publications a lot more enticing than this Tavistock effort.

The ground itself is dominated by the large changing room block alongside the halfway line, two identical small flat-pack stands rest alongside each other either side of the players entrance (tunnel), these offer decent seated views of the pitch which I took advantage of for the first half of the game. Across the pitch is another low level covered structure almost shipping container fashion in appearance, a few freestanding plastic chairs have been provided. The two dug outs are positioned either side. 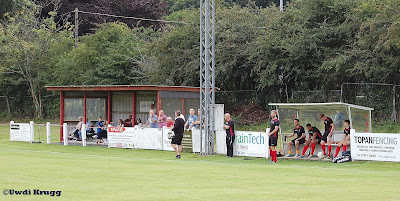 About a third of the perimeter of the ground is out of bounds. The end nearest the clubhouse has a very shallow grass bank and just beside the corner flag resides the Tea Hut and a VIP bunker for cheese spread sandwiches, Mr Kipling french fancies and other half time niceties that club officials seem to like. 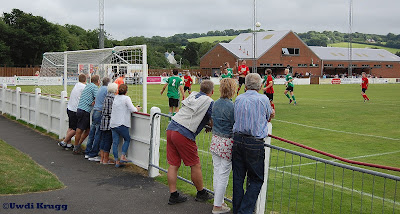 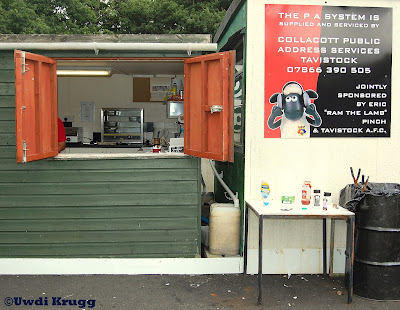 To be honest there is not a lot of character at the ground but what was I expecting... Roker Park or Maine Road, its not going to happen at the blunt end of the cash strapped football pyramid. I'll shut up about charismatic waffle and get on with it. The one thing I will state about Langsford Park is that it is absolutely spotless, prim and proper and immaculate in general presentation, this includes a very nice looking pitch and all of the perimeter. Some people are obviously putting in a great deal of effort here for such a spick and span appearance. 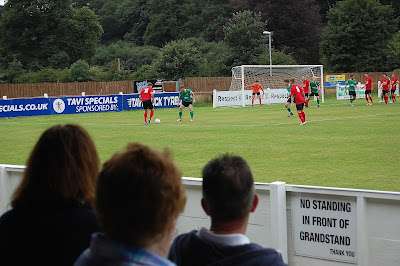 I loved the fact that the teams came out to the soundtrack of a Clint Eastwood spaghetti western, brilliant. Might be better saving the psychology for the likes of Bodmin Town, no disrespect to Ivybridge. Anyway, it obviously did the trick as the Clint Eastwood boys produced a Fistful of Dollars performance to totally blitz a workmanlike but bemused Ivybridge side. To utter statements like it could (and should) have been a cricket score can be taken as gross sensationalism but its the honest truth. I'm talking well more than 10 or 12 goals here, the chances Tavistock created and were either fluffed or miraculously saved were of a massive total, 8-0 is a very big score but Ivybridge got away lightly and certainly owe a round of applause for their keeper who tried his hardest to stop the tidal wave coming in.

It was a faultless performance, any intrusions from the visitors were immediately mopped up, the passing was fast and accurate, the speed of the approach play deadly impressive and the skilful turn of foot sublime, it was a rampaging bull of attacking entertaining football and a credit to non league football at this level.

To round everything off at the final whistle the tannoy blasted out the tune of Those Magnificent Men in their Flying Machines, very apt indeed. 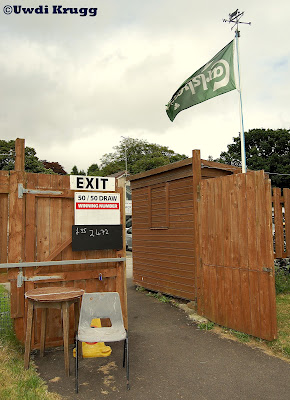 I had 15 minutes to get back to the Match Shed in the town centre before encountering the wrath of Match Cow. I just about made it following a performance that would have probably seen me qualify for the Rio Olympics Speed Walking Team. Saying that I was still overtaken by a warp-drive mobility scooter with an elderly chap wrapped in a big red and black Tavistock scarf. "8 nil will do won't it" I politely chirped up to him. "It will indeed" he replied, then he added " Bodmin will be quaking in their boots"! Hmm, not sure about the quaking expression but I trust it will be noted back in Cornwall... and what a match that will be when the two sides eventually face up to each other?
Well done Tavistock, really liked what I saw, you certainly deserve more than 130 spectators through the gate with sparkling football like that on offer.
Posted by Uwdi Krugg at 19:03

You mention the spick and span appearance. Argyle played there in pre season and I was informed that the ground is tended to by about 4 guys the youngest being about 75 years old. All credit to them.

Thanks for taking the time to come down to Tavistock and we are glad you enjoyed the match and the facilities.
We will take on board your comments about the programme and will do better, promise!

All the best
Tavistock AFC

Thank you Bob - you are quite correct about the 'Morning Crew', although Derek is a couple of years off 75, Les compensates by being over 80! Their tireless years of graft should not go unnoticed and they were duly presented with the President's Cup at our recent presentation evening in recognition of their years of hard work. There are many like them at Clubs across the league, but I wouldn't swap our 'old boys' for the world!

Regarding the programme, my colleague is quite correct that we must do better. I agree and I produced the programme in question (and sold it to the blogger at the gate), so the egg is very much on my face.

The irony about the £1 charge on Saturday is that, following this purchase, we decided that it would be better to give the programme away and explain the reason for doing so (insufficient content), then develop our offering until we are happy to charge. So on Saturday we had 29 relatively satisfied customers who each had a team list for free, and one who paid over the odds (and wrote about it!). With that in mind, our blogger is entitled to a free programme once we have a decent one in place.

To help us entice the blogger back to purchasing non-league programmes, we have recently found both a commercial manager and media manager so are in the process of gathering more content providers, images, advertisers and fresh ideas for content (to set us apart from the crowd). So it will get better - please just give us a few weeks to get a new template in place.

Programme aside, there is a lot to be proud of at Langsford Park. The football Stu and Ken's team are playing is, at times, breathtaking. Our supporters have waited a long time to witness play (and results) like this, and we are committed to keeping the current team in place. The blogger is correct that more should come and enjoy what is on offer. The game next Tuesday 16th, against Parkway, should be a feast as we have finally produced a side that can compete with the established big hitters in the Peninsula Premier.

In terms of the ground itself, we have a schedule of works that will give us a facelift over the coming season. Improved floodlighting and signage then, when funds allow, better spectator fencing and hard-standing around the full perimeter. It is, of course, a balancing act; putting out a team that can entice more supporters and sponsorship, whilst ensuring those new supporters are well catered for and sponsors don't feel as if they are 'slumming it'.

It has always been a challenge in Tavistock to grow the gate - and, unlike some of our title-chasing rivals, we don't yet have a plethora of four-figure backers. But for the first time during my time at the Club I do sense we are close to a breakthrough and that more will come to watch, and potential sponsors will soon come to recognise that they are investing in a Club with ambition and an association with us will be mutually beneficial.

Eric's choice of music baffles some, but there is no doubt that it is idiosyncratic and adds a little extra charm to proceedings - as do his occasional musings on the mic. And Julie's half-time teas (which put Mr Kipling to shame!) are a treat for our very fairly priced matchday sponsors and visiting club officials. I believe that our matchday team more than make up for any shortcoming in the surroundings, and I'm grateful that our guests tend to agree.

All in all, it has been an honour to represent Tavistock AFC during this long-awaited renaissance and my colleagues and I won't leave any stone unturned to up the ante, so we welcome constructive reporting and are open to fresh ideas to improve what we serve up on matchdays. I look forward to welcoming our blogger back to Langsford Park over the coming season and beyond and reading his accounts with interest.

A good season to you all.