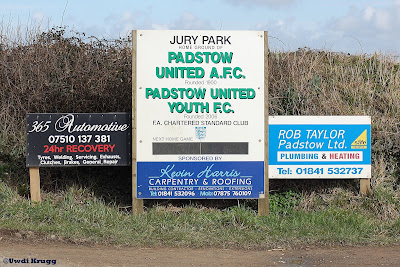 Padstow is an extremely popular tourist trap on the North Cornwall coast.

Rick Stein seems to own three quarters of the surrounding area with gift shops, delicatessens, restaurants, a pub, hotels and even a mega expensive chippy. Some of the locals have taken to renaming the place 'Padstein'.

There always seems a willing queue of visitors eagerly waiting to pay well over the odds down the busy streets surrounding the harbour and quayside. Rick has started a trend that has witnessed countless lesser known pretenders staking a claim for some of the tourist related income. There's big money to be made.

20 years ago Padstow was a charming charismatic place with a great atmosphere, now you're just swamped by the gross commercialism and cheesy claustrophobic crowds slogging around the hard sell gift outlets and the ridiculously priced eateries. 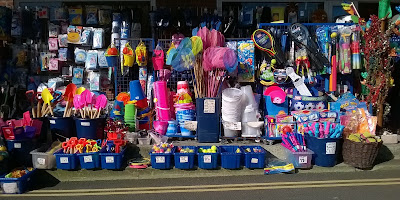 2 hours on my parking ticket gave me far more time than I needed, something I'd never have said when I often came here years ago.

What better reason to escape the mass marketing and dried up pasties than getting some fresh air just outside the town at nearby Jury Park the home of Padstow United. Cornwall football by the coast, what could be better. 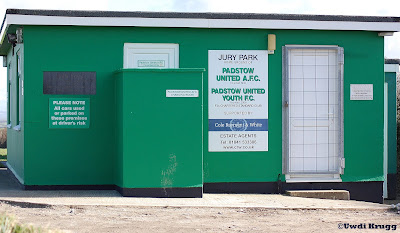 The Green Army (as Padstow market themselves at the ground) play in Division 1 of the East Cornwall League. Not to be confused with the slightly larger Green Army over at Home Park, Plymouth Argyle. 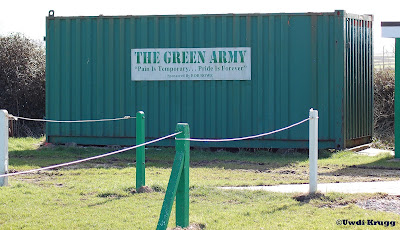 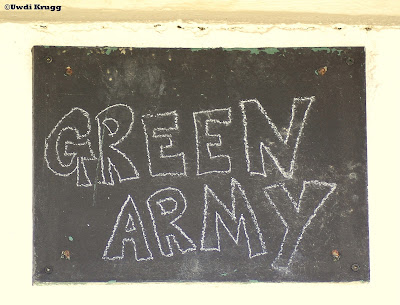 Jury Park is an open plan ground with some nice views over the fields but to be honest not a lot else. 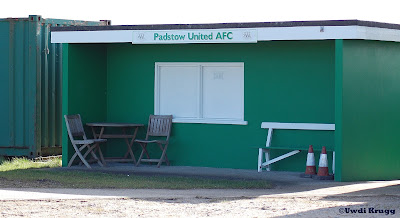 There are changing rooms, dug outs and what could even be a tea hut but you won't find any stands at the location. 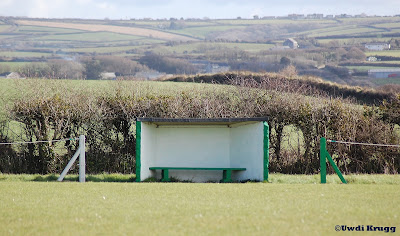 Still makes a welcome break from the tourist packed streets around Padstow Harbour though. I know where I'd sooner spend a quiet afternoon.
Posted by Uwdi Krugg at 20:08 No comments:

Lanreath, which is pronounced 'Lanreth' is a smart charismatic little village around 6 or 7 miles from the popular seaside port of Looe.

It looks a quite place to be honest, most of the action seems to circulate around the village shop, lets just say it's not exactly buzzing.

The football team trot out at Rally Park and play in Division One of the East Cornwall Premier League (bit confusing title that isn't it). Shall we just stick with ECPL D1. 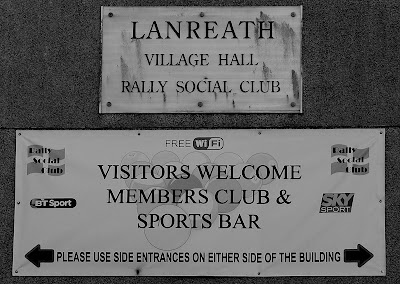 Rally Park houses a rather large looking Sports Bar and extensive car park which advertises free 'flop on the floor' Satellite TV football channels we normally have to pay for back at home. Its a rather imposing building actually as it looms over the adjacent football pitch, it lurks in the background like some unwelcome intruder from outer space. It's probably very friendly and homely inside with not a Martian in sight.

The ground is pretty much open plan and I can imagine it's a cruelly exposed location when the rain pours in from the Atlantic.

It's neat and well kept with advertising around the pitch perimeter and has a couple of nicely weathered dug outs to compliment the facilities. 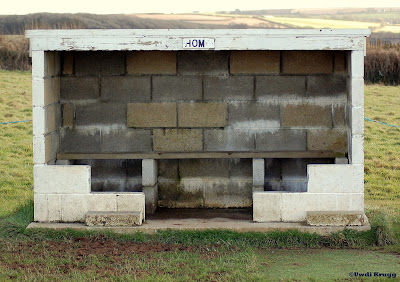 The jewel in the crown is 'The Kippax' covered terrace which nestles between the aforementioned dug outs. It's tiny and I can imagine it gets packed with freezing cold substitutes during the game as they seek 'Shelter from the Storm' (slight Bob Dylan plug there, sorry). Get here early if it's dodgy weather, viewing spots out of the hailstones will be at a premium.

Can't really recommend anything grub wise in the area, perhaps the Sports Bar do stuff? To avoid disappointment best rustle up three or four sandwiches from home just in case. Piece of cake would be nice too. 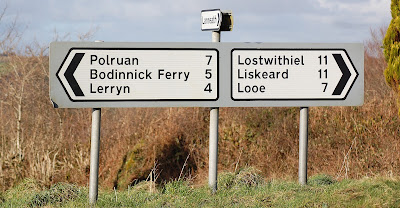 Tension mounts at the Tea Hut window, this blokes buying all sorts! 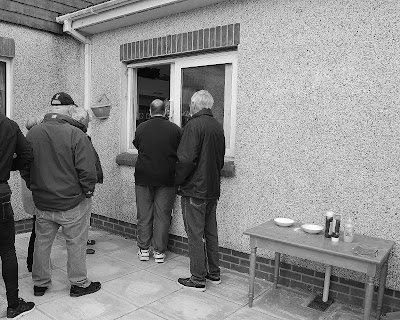 
Launceston play in the Premier Division over at the neat and tidy Pennygillam ground. Its got a bar, hot drinks, hot food and a seated main stand.

Like most grounds in the South West the pitch can start to suffer midway through the season but that's down to the wet weather rather than a lack of attention from the ground staff.

There are two main roads into Cornwall, the A38 which takes you over the Tamar Bridge at Plymouth or the A30 which slogs up and down the rollercoaster past Okehampton. On this A30 route Launceston is the first town you meet over the Cornwall border.

The town has got a Castle, a Tesco's and a narrow gauge Steam Railway.

It also sports one of the best fish and chip shops for miles around, the much under publicised 'Francines'. Get the Cod & Chips, you'll be full for a week. 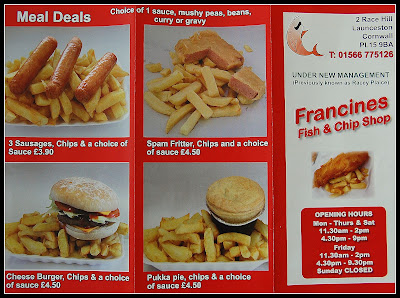 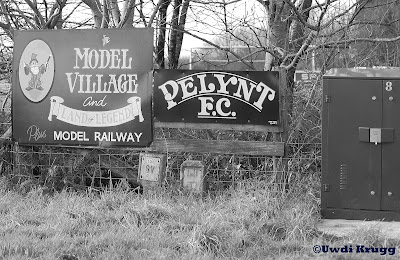 Pelynt FC are located just off the main road from Looe to Polperro.

Its very much holiday maker country down in South East Cornwall, when it's not raining that is, which unfortunately seems to occur very often. I'd go home early too if it had p*ssed it down all week (but that's another story best kept separate for now), I've been living down here 3 years and there's hardly been a dry day yet, I kid you not, check out the postponements to Cornwall based non league games this season and you will be amazed at the call off rates, all due to waterlogged pitches, or should I say pop-up ponds?

Getting back on track with Pelynt, the club play in Division One of the Duchy League and the homely little ground is a well kept picture of delight. Hopefully the snaps at the end of this introduction shine a little light on this treat.

Its a lovely setting (despite the nearby road) nestling amongst wooded countryside as it sweeps downwards towards Talland Bay and the sea. You are a short walk from the waves here, its that good. Hence the expansive caravan site on it's doorstep with a mobile fish and chip shop 5pm every night.

There is not a lot grub wise in shooting distance otherwise. You can pay the sky high car parking charge in Polperro and sample their few pub grub pubs or delve along to Looe for overpriced sadly hit and miss food but genuine quality value for money tucker is hard to find in these parts. There is a pub doing food in Pelynt village which is quite a way back up the road from the ground (certainly not walking distance) think it's called The Jubilee Inn but I have yet to try it, hopefully it will compliment a nice day out to the football ground. There is also a really good cafe down on the waterfront at Talland Bay but I suspect this may not always be open during the winter season, best check beforehand, just google Talland Bay Cafe to check.

Anyway, getting over the minor gripes about Cornwall weather, ridiculous Polperro parking charges and dodgy dinners it's time to let you take a look at this basic but very scenic little non league ground, a credit to everyone at Pelynt FC who keeps this gem so spick and span. 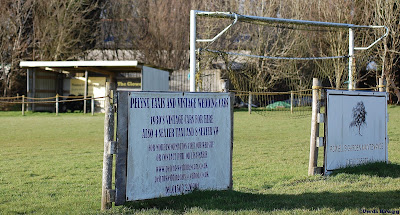 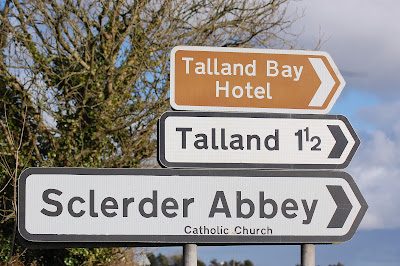 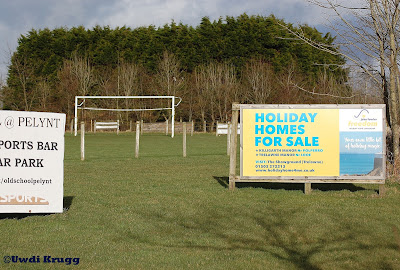 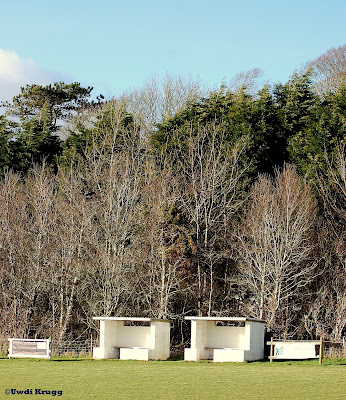 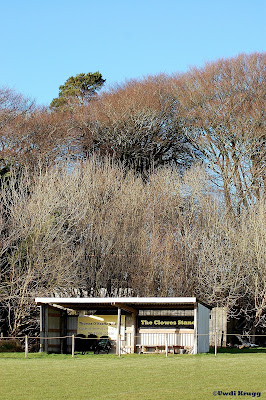 St Cleer are a Cornwall Duchy League side who play in Division 2.

It's a nice little village a few miles north of Liskeard. There is a rather pretty church and a couple of pubs. Sadly the the popular Farm Shop recently closed. Best choice for grub is the nearby Cheesewring Pub which is a couple of miles further on at Minions, top value stuff and very plentiful portions.

The ground, perhaps I should say sports field, is on the northern edge of the community just off the main road heading towards the junction for Siblyback Lake, Common Moor and Minions. Its set back on the left.

St Cleer FC play in all blue and when necessary change to yellow and black for away games.

For such a small club St Cleer have a cracking looking stand on the halfway line. Its the only structure on the field apart from the dug outs and it looks a picture, certainly for this level of football. So good I have just adopted it as the new header photo for the Tea Hut site (hope they don't mind).

I visited the ground earlier this week during a rare sunny spell (same trip I did Pensilva actually).

Lovely part of the world skirting Bodmin Moor, when it's not raining that is.

Here are a few snaps of that attractive little stand. 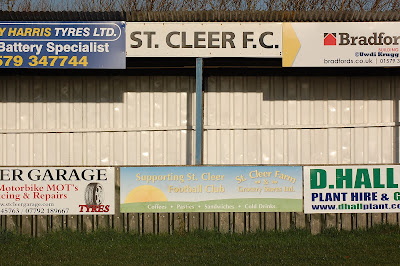 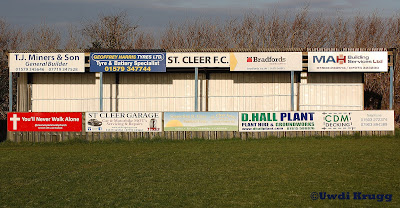 During a rare interval from the never ending rain I popped up to Pensilva and took a few snaps of their charismatic little stand at the Millennium House Recreation Field.

The early morning provided some long overdue sunshine, which was a bonus.

Pensilva ply their trade in the ECPL Premier Division.

I'd seen them play on the ground last season in a 2-5 Cornwall Senior Cup defeat against Falmouth Town but didn't have the camera with me.

In between all these postponements with the awful Cornwall weather the chance of something vaguely football related was most welcome, even if there wasn't a game taking place. 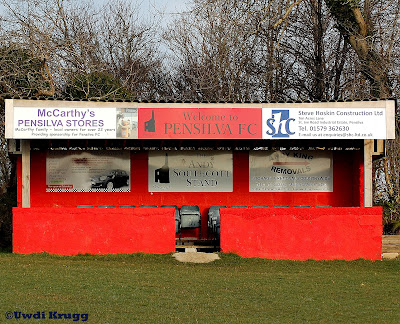 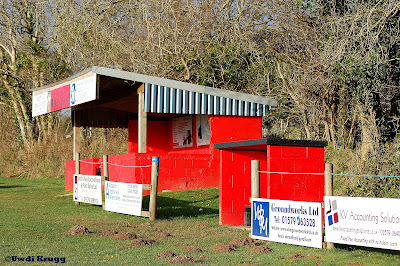 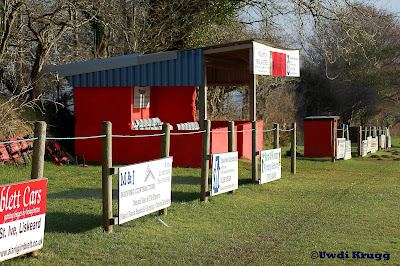