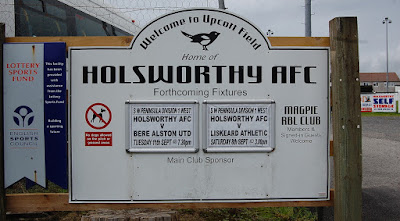 Not a lot going on in this quiet but characterful little town, appears Holsworthy shuts up shop come midday on a Saturday, I passed 5 people in the town square as they drifted between the Co-Op, a Cafe and an Electrical Shop. The main car park even stops charging at lunchtime. Not exactly rocking at the prospect of the league leaders providing todays in-town opposition. 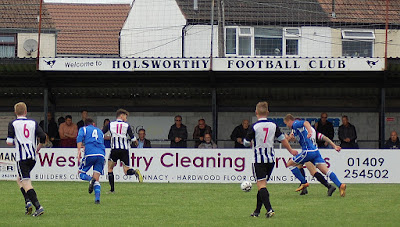 Upcott Field is a nice little non league ground for this standard of football, there's a decent low level stand with a row of benches and room for standing at the rear, they've also got a busy club house with a bar and comfortable seating arrangements. A refreshment window adjacent to the entrance provides burgers, chips, sausage rolls and the usual stuff your Doctor tells you not to eat. A bit further along resides what looks like a retro 70's style caravan which appears to act as the Club Office. The rest of the place is just the railed off pitch which seems to dip towards the playground end of the stadium. The surface looked in good condition if not a little hard from the uncommon dry summer. 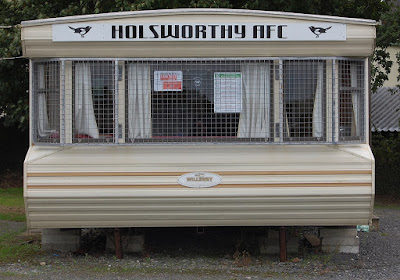 A reasonable crowd of 80 odd showed up with about a quarter coming along from Cornwall as the Liskeard support. 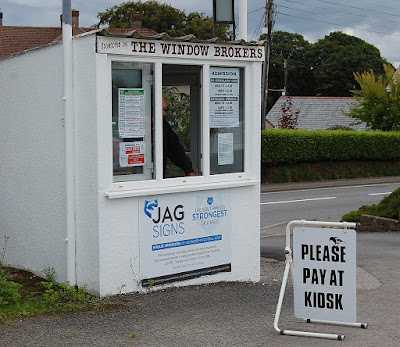 Neither Holsworthy or their visitors had lost a game yet with Liskeard currently joint top of the pile alongside their Cornwall rivals Porthleven on points.

Suppose neutrals had the visitors down for the 3 points and their possession and the chances they imposed upon Holsworthy certainly backed that up. Liskeard continually fluffed their opportunities throughout the game and despite hitting the woodwork on numerous occasions just couldn't extinguish the threat that Holsworthy might pinch something from this encounter. 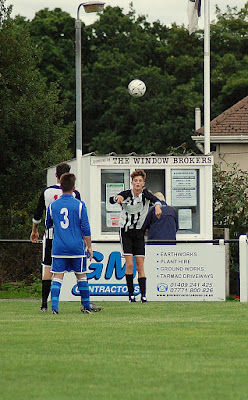 Being honest it was a hard game to watch, the passing, cohesion and finishing was pretty much poor quality. This was a particularly scrappy match and only brightened up when Liskeard defender Adam King popped up in the box to head home the only goal of the game in the second half. 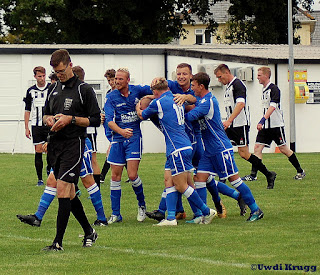 This spurred the home side into some spirited advances over the halfway line which in turn gave Liskeard more scope to counter attack, one of the current best strikers in the division, James Lorenz can count himself very unlucky to not get on the scoresheet, his clever approach play and lightening turn of foot had the Holsworthy defenders in knots. 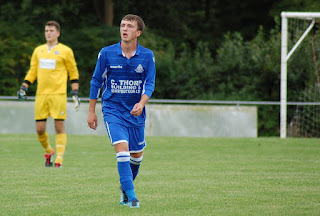 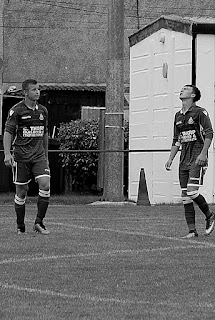 Likewise fellow Liskeard striker Ben Waters who was incredibly unlucky not to grab a few goals himself, the goalposts saved Holsworthy on a number of occasions, how the ball didn't go in the net was incredible.

Must add a note about the Referee Mr Anthony Cloak, it cannot be easy officiating in non-league but I have to say Tony was absolutely top notch at keeping this game flowing, his common sense decision making and firm communication provided the ideal platform for football, shame the respective team performances let the event down a tad. 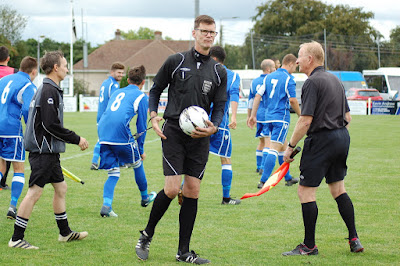 A brief summary of the afternoon would be Liskeard got the 3 valuable points they needed but more or less 'won-ugly'. They are a far better football side than this showing but at least they got what they came for. Holsworthy battled hard but they don't quite look the finished article on this showing. Liked the ground, very friendly people and the sleepy little town had some nice touches about it too. Being honest and not wishing to appear disrespectful I've seen a lot better games at this level.