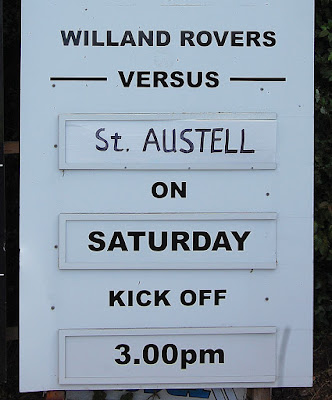 FA Cup stuff today. A competition treated with the utmost respect by non league clubs but disgracefully abused by the prima donna Premier League sides who end up in the latter stages. Enjoy the true Cup commitment while you can.

This tie at at the attractive Silver Street ground looked like it could be an interesting encounter despite Willand from the Southern League Division 1 South plying their trade two divisions above St Austell who play in the South West Peninsula League West. A classic Devon v Cornwall tussle was on the cards and one in which St Austell should not be taken lightly, they were on fire during their 6-1 opening game victory over Liskeard in the week.

Getting In
Willand is a couple of miles up the road from Cullompton. On arrival at the ground you quickly realise there is no car park for spectators so you have to park on the narrow Main Road or find somewhere in the nearby housing estate. Having driven up from Cornwall and getting there an hour before kick off I managed to get one of the half dozen spaces directly adjacent to the entrance gate on the double sized pavement.

The entrance hut staff told me there was no programme today, it was a team sheet only. It wasn't that they don't do a programme normally, unfortunately the person that puts the publication together had a pressing hospital appointment. I wish their programme provider well and that everything goes ok.

The Ground
I liked Silver Street. Excellent playing surface, spotlessly tidy and a nice mix of both seated and standing accommodation.

The Paddock was a popular choice for many, it nestled two thirds of the way down the touchline. They'd even put a few garden chairs in there too.

A few yards further up, slap bang on the halfway line was the Main Stand. This afforded a comfortable view of the action with the re-assurance you wouldn't get wet if it chucked it down.

The BBC Weather Team had been doing their theatricals about the biblically proportioned 'end of the world' this weekend with predictions of severe ongoing storms, lots of thunder and hurricane force gales. Ok it was a bit breezy but nothing to effect the proceedings. It only sprinkled with light rain for a few minutes (wish we had proper weather forecasters back on TV instead of these publicity seeking drama queens).

At the far end of the ground resides a rather nice spacious clubhouse with more covered viewing in easy reach of the bar.

The changing room block is right alongside.

The rest of the ground is hard standing with a feature thatched cottage sleeping down by the corner flag. 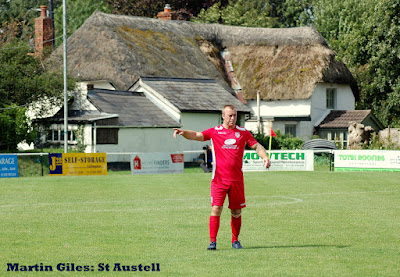 Tea Hut
It's built into the outer side of the clubhouse and offered a decent range of hot grub. I got a favourable cup of tea for a pound. 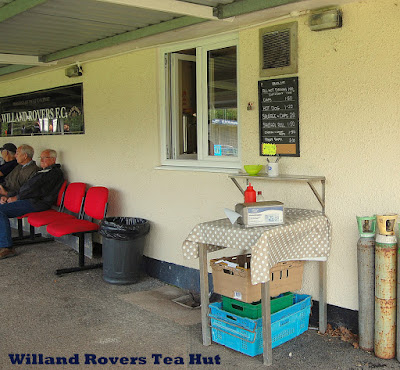 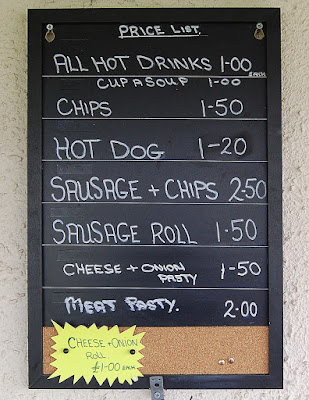 The Match
My head count got the crowd around the 200 mark, many of whom had travelled up from the St Austell area. First time I've seen the visitors in the all red away kit.

Some folk had hardly had a bite of their savoury pasties when Willand went 1-0 up through a Craig Veal header in the second minute. Barely had the St Austell bench communicated Plan B when the impressive Jake Miller majestically guided home a long range hole-in-one equaliser from the halfway line, a truly sublime lob that brought back memories of Beckham doing the same at Crystal Palace. 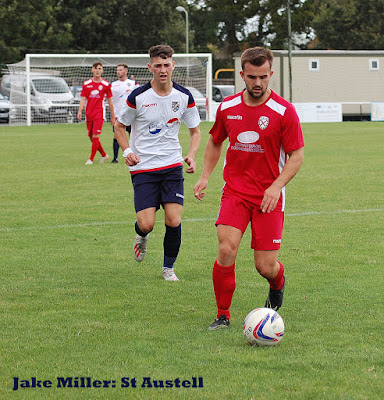 An unbelievable amount of chances were being created by both sides, Jason Chapman was outstanding in the St Austell goal as Willand poured forwards on attack. St Austell countered and were unlucky not to grab the lead themselves. It was tremendous stuff.

There was a slight contrast in the body language of the respective benches, Willand looked remarkably calm as if they'd seen it all before whilst the visitors managerial team endlessly consulted and encouraged the players. 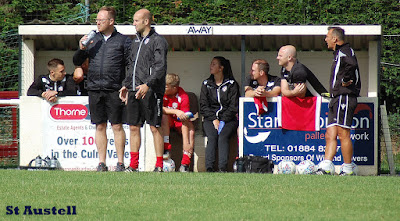 Second half Willand gradually applied a tighter grip on the proceedings but St Austell were still cutting forward with a great deal of menace.

Dean Stamp was a constant threat for Willand up front and he duly got the home sides all important second goal with around 20 minutes remaining. The relief from the locals was obvious.

The St Austell supporters in the crowd were willing their side to snatch the equaliser but Willand just about held out. 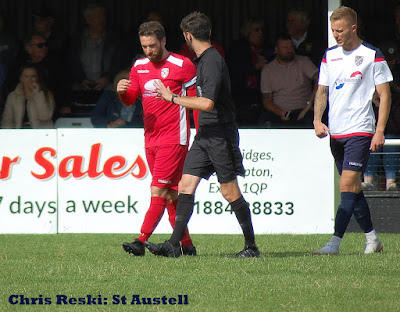 A gutsy effort from the Poltair Park Predators of Cornwall who certainly did the South West Peninsula League proud.

On the way out the gate I overheard a mix of home and away supporters muttering that a replay might have been a fairer result?

Cracking cup tie, good luck to Willand in the next round.
Posted by Uwdi Krugg at 15:35