I'm not venturing into paragraphs about Covid, there's enough been said already, all I will say is that it's absolutely fantastic to be able to watch live football again.

What better leg stretcher than a friendly incursion into the wonderful East Cornwall Premier League. A pleasant summer evening complimented the quaint village of St Cleer which is a few miles up the road from Liskeard. Bit of a shock to find the Car Park rammed full upon arrival, there was some kind of Junior Football evening taking place on the adjacent pitch which resulted in cars haphazardly slung about the country lane passing the ground. I took the safer option and parked back in the village behind the church.

St Cleer FC is a great place to watch a game, its scenic, friendly, relaxing and usually they put on a decent exhibition of football. If you get there early there are some terrific countryside walks nearby, Siblyback Lake, Golitha Falls and The Cheesewring are just a few of many well documented locations. Pre match refreshment can be taken at the Market Tavern across from the church, I think they do grub Wednesday to Weekend, a couple of miles further on resides the St Cleer shirt sponsors 'The Cheesewring Pub' in Minions hamlet, a place often applauded for plentiful portions of good home cooked food.

This was the home sides opening game of the season, Gunnislake had already got an impressive away win under their belts last Saturday 0-1 at Torpoint Athletic Thirds.

What struck me immediately was the intensity and passion being afforded by both sides, crunching (mainly) fair tackles, pace, energy and the obligatory non league yelling and cursing soon introduced themselves to the serene evenings surroundings. 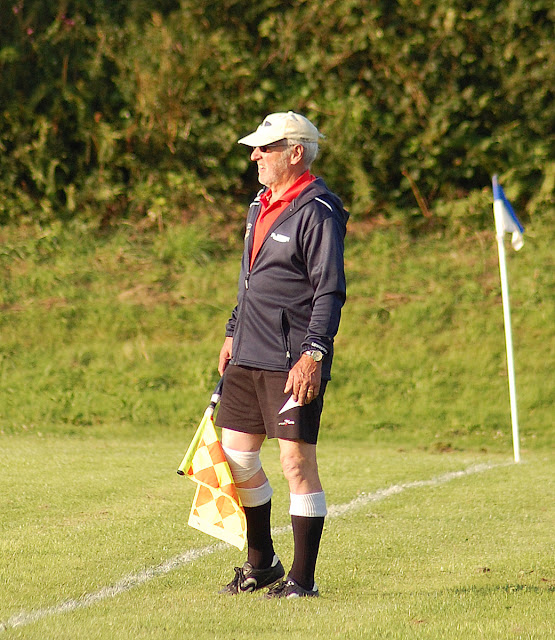 Must say I am a big fan of the new FA directive to let the game flow more openly, what is so good about non league is that the players just get up after a hard tackle (if they are able), this is in stark contrast to the delicate flowers of the higher echelons of the professional game who spend most of the match rolling over and screaming for their Mum.

The first half witnessed some quality passages of passing football which is a credit to this level of the game. Chances came and went at both ends and perhaps the only difference between the sides was a sublime audacious back heel from the visitors Kevin McCallion to put Gunnislake in dream land.

Second half the encounter got a little scrappy and disjointed, the telling factor was Gunnislake taking a firmer grip of the proceedings, St Cleer were struggling to make cohesive in-roads as regards an equaliser and it was no surprise when Gunnislake captain Jamie Rowlands smashed in a second goal off the underside of a quivering crossbar.

A few tempers made a fleeting entrance but it was soon put to rest, wouldn't call this a dirty game. 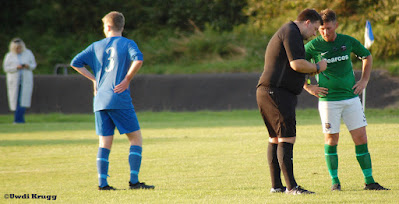 Credit to St Cleer they certainly didn't give up and began making a few tactical switches and throwing people forward, they deservedly got one back but the ticking clock was too far ahead for a dramatic conclusion. Gunnislake probably deserved the victory and their impressive start to the season continues. Good job we kicked off at 7pm prompt, the evening gloom was certainly encroaching come the final whistle. Sign of things to come I'm afraid, where has the summer gone? Enjoy it while you can.