Parking: The ground is on a large field so you can pull up wherever you like

My first encounter with the Cornwall St Pirans League and most enjoyable too.

Polperro attained entry to this level the previous season after performing remarkably well in the ECPL (East Cornwall Premier League).

They're now in the mix with other aspiring local non league clubs alongside various Reserve sides from higher levels of the FA Pyramid, mainly from the South West Peninsula League. Millbrook Reserves have links to a higher league still, their first team play in the well known Toolstation Western League Premier Division. Big test for Polperro then?

The Where's The Tea Hut site already has a comprehensive ground guide for Polperro FC still available in the archive section to be found on the right hand column on the webpage. You'll find it under the 2017-18 heading. This particular report for the Millbrook match also reflects on what you'll find at this friendly little club but more in relation to recent developments.

I'd arrived early in the area, it is absolutely stunning coastal countryside around Polperro. I took a nearby saunter to the South West Coast Path literally 5 minutes from the ground. Go to the end of the approach lane to the ground from the Main Road, turn left at the junction, in about a hundred yards you'll see a public footpath sign, take the stone and gravel track and step over the stile at the far end of the field. The footpath soon feeds into Coastal Path section for Polperro to Looe. It's usually pretty quite on the path but with the massive amount of tourists in the area, mainly due to our pandemic related staycation monster the quaint little footpath resembles a footfall motorway, never seen it as busy in Cornwall as this summer.

Anyway, back to the Polperro Ground. The main features are a recently developed Clubhouse which is open but still reaching final completion and it really looks the business. There is a well stocked bar and amazingly luxurious toilet facilities for a non league set up, the place has that unmistakable feel of quality about it.

Punters were eagerly partaking in pints of ale and cups of tea during the afternoon, excellent to see at this level. The other addition since I last took a look at the place back in 2018 is the Matt Pengelly Stand on the halfway line. With the usual Cornish wintertime weather I can see this being the go-to location for those wonderfully wet, misty encounters from November to March. 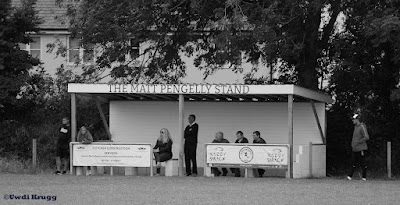 As regards the match, Polperro were mighty impressive, there was an obvious culture of commitment, endeavour and unity about them which resulted in plentiful portions of attacking football. Their visitors associated with the big Western League fancy wrapper didn't fair too well, they looked decidedly uncooked, slightly wayward and more than a little fragmented, perhaps they had a few absentees for various reasons, the Covid bug can still ravage a sides preparations and of course there was that big pop festival taking place in the Newquay area (Boardmasters), an event that tends to attract the less loyal players on the books, a factor which has often been used by many a club as an attractive excuse for an unfortunate tonking, got to sympathise with coaches and managers in these situations, I got the impression, my apology if I'm wrong, that the visitors may have had a couple of players missing or playing in unfamiliar positions, the Millbrook coach was doing his very utmost to guide and sensibly encourage his players during the afternoon but all to no avail. 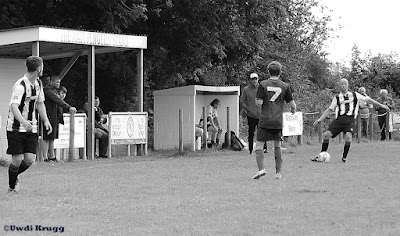 The game ended in a resounding 7-1 victory for Polperro, being perfectly honest, no disrespect to Millbrook, the home side should have doubled that scoreline, never seen so many gilt edged chances squandered. There was a cohesion and class about their play evident from kick-off, perhaps they know the tricky contours of the pitch so well, perhaps they wanted to apply a clear marker for this league campaign from the start, who knows but it certainly seemed to work. You could tell they cared so much by all the evident frustration they expressed at the solitary Millbrook goal. 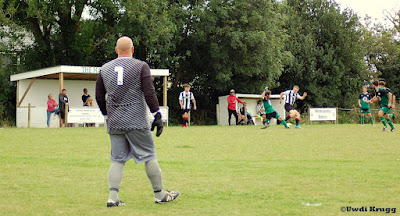 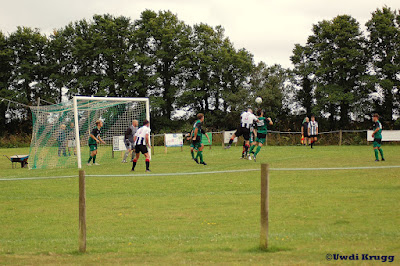 Think Polperro might be well worth keeping an eye on during this seasons St Pirans League.